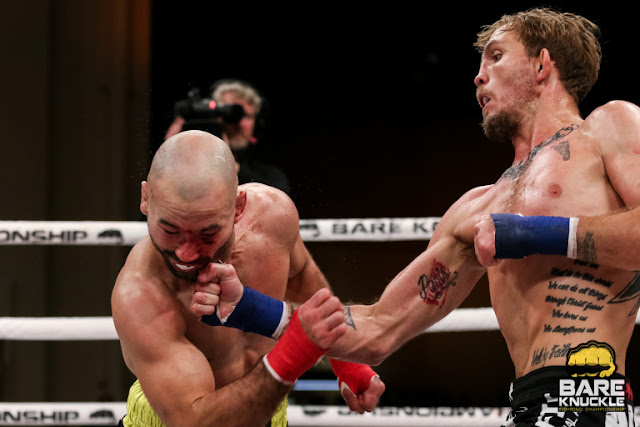 Jason Knight made reality his words in the buildup to the Rematch fight against Artem Lobov In the main event of BKFC 9 and this time got a positive result.

Knight made use of a very tactical approach from the first round and with that busted up Lobov’s eye while drilling him to a fifth round TKO victory at the Mississippi event center, Biloxi.

Knight used his reach advantage effectively from the opening bell, peppered Lobov with hooks and almost sent him to the canvas with a hard right hand at one point. His movement was superb, with some head moves that forced Lobov miss while firing his swinging blows.
“I stayed strategic. I knew exactly what I was supposed to do,” Knight said in his post-fight interview. “I was prepared. I was technically sound, and I was prepared for the fight the right way. I told myself the whole training camp that I’m going to fight the fight I’m supposed to fight.”

Knight continued his dominance in the second round, switched to southpaw and with that gradually picked Lobov apart. Knight’s work was paying off as Lobov’s eye got swollen and that left him a little vulnerable and eventually cracked with a right hand that sent him to the canvas for the first Knockdown.

There was a brief break before the start of the third round as there wasn’t a ring side doctor around but when action resumed Knight did his job avoiding being caught by Lobov, whose swellings and cuts got worst which was mostly it, as there was little action in the third round.

Knight was far ahead on scorecards by the fourth round and that forced Lobov into a desperate aggressive mode that saw him land some of the biggest punches of the fight and earning his best round. Knight took them all well.

Lobov’s eye was swollen so bad before the start of the fifth round and Knight smelled the end and went win pressurizing Lobov and with one of those rights landed on Lobov’s eye forcing him to take a knee but after making it to his feet, his corner deemed it right to throw in the towel at exactly 0.29 of the fifth round. 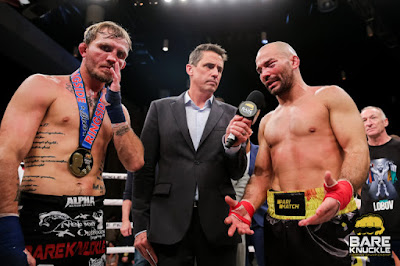 After the fight, Knight made clear he is ready for a trilogy fight with Lobov with both fighters now 1 – 1.

“Of course, if he wants it,” Knight said. “I love that guy. I respect that guy; he respects me. Anytime he gets in here and wants to do it a third time, I’m ready.”

Lobov was low after the fight and turned down questions concerning his future. He admitted to being very emotional after losing via stoppage.

“Of course, I have to go back now,” Lobov said. “The emotions are very low after a loss, especially a stoppage loss, so it (expletive) hurts double bad for me. You just have to take it and accept it and move forward. I’ll have to see what happens.”