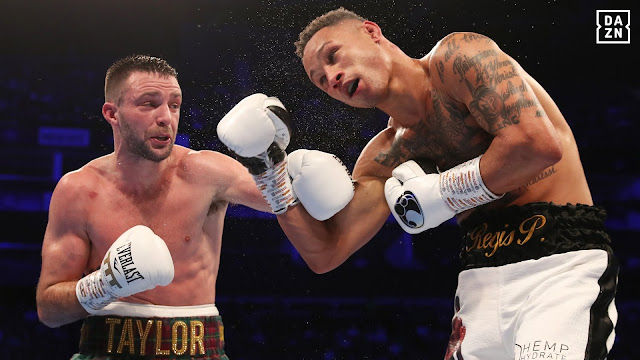 The WBSS finally came to an end for the super lightweights and the final was explosive as expected. Taylor produced a masterful performance against formerly undefeated Regis Prograis, defeating the American via a herd earned Unanimous Decision with scores 114 – 114,115-113 and 117 – 112 at the O2OArena in London.

Josh Taylor was impressive throughout and even when he looked gased towards the end of the fight, he was able to take in blows from a resurgent Prograis who sensed he needed a KO to win the fight.

Prograis output significantly slowed early in  the championship rounds giving room to Taylor  who drilled and bloodied him in the seventh round. However Prograis Battled back in the 8th round using his Jab and even successfully landed a big right hand that Taylor with ease.

Prograis continued his resurgence in the 9th but Taylor finished the better fighter at the end. In the 10th round, a huge cut opened on the right eye lid of Taylor, who was forcing the fight in the round.

Both fighters had their moments in the eleventh round, Taylor also had a cut on his left eyelid, as Prograis was more dominant of the two.

Prograis fired in for a Knockout in the 12th round but Taylor was ready to exchange with him till the final bell was heard.