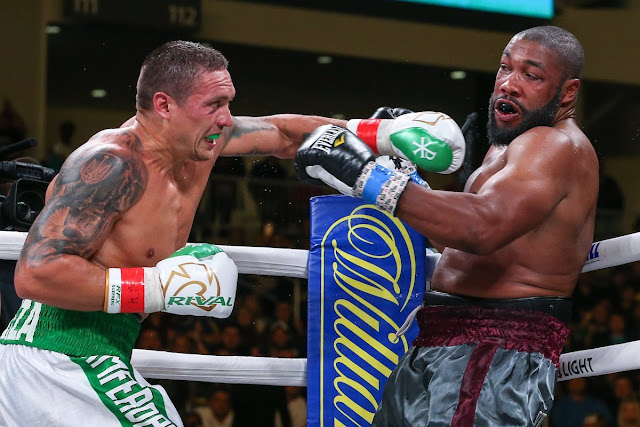 Oleksandr Usyk made a successful debut at heavyweight with a seventh round KO of Chazz Witherspoon, handing out a one sided beating in front of a crowd of around 9000 at the Wintrust Arena on the campus of DePaul University in Chicago, Illinois.
Usyk who was initially scheduled to begin his heavyweight journey in May, was given the victory before the start of the eight round after referee Hector Afu consulted Witherspoon’s corner.
The former cruiserweight Undisputed Champion admitted the weight difference and his time awayafrom the ring actually affected him earlier in the fight.

“Yes, there is a little bit of difference,” confessed Usyk afterward though with a disclaimer. “But I used to fight as a heavyweight (in the amateurs).
“But yes, it was different.”

Usyk who was initially scheduled to fight Carlos Takam was forced to wait eleven months due to a torn bicep witnessed a slow start to the fight but action picked up in Round Three when Usyk while working behind the jab threw straight hands with regularly and up-ed his game in the next round forcing the crowd into a frenzy, while he pounded away at the veteran.

Witherspoon got Stunned in the sixth round of the fight, coupled by straight hands from Usyk and sent hanging in the ropes. Witherspoon had no choice but to keep his hands up on his face in a bid to deflect the in coming punches from Usyk.

In round sevens Usyk saw blood and went for it, as Witherspoon eventually stopped throwing punches. Usyk wanted to end the fight and gave his all to that effect  leaving the crowd on their feet.

“I did what my trainer told me to do,” insisted Usyk, an interesting comment as he’s been all but self-trained his past few fights, with renowned cutman Russ Anbar once again taking the lead on Saturday. “I just follow their orders and that was to box.

The fight ended before the start of the eight round when Tommy Brooms I. Formed the referee that their fighter couldnt continue the fight.