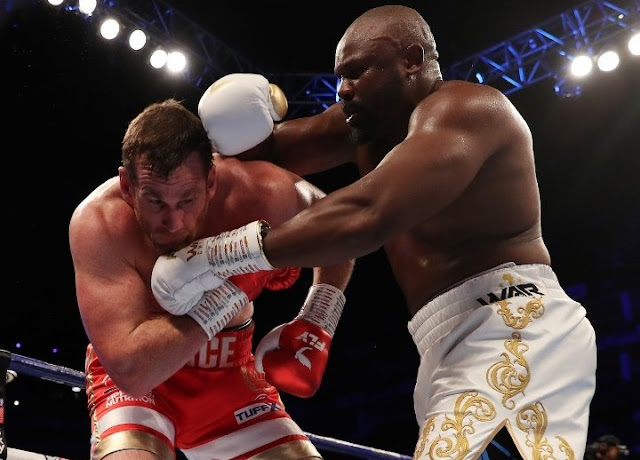 Derek Chisora was able to finally get his third win of the year with a fourth round stoppage victory over David Price, who was a replacement for Joseph Parker.

Chisora was able to show his superior boxing skill despite fighting against Price, who had height and reach advantage. He stunned Price in the third round with a right hand and a left hook which he took well and connected with an uppercut before the end of the round.

Chisora knocked down Price in the next round and Price responded slow and using the ropes to get back to his feet, before the referee Howard Foster could continue the fight. Price corner threw in the corner.

“I came to seek and destroy. If I caught him, he would be gone,” said Chisora, who claimed his third win of the year. “It was just business. He stepped up and saved the show. He buzzed me and caught me with an uppercut but I recovered easily and I came back and finish the job.”

Price was out matched and struggled to hold up Chisora, who came forward with Jabs and overhand right hands, despite the six-inch height advantage and eight-inch reach advantage of the 2008 Olympic Bronze medalist.

Chisora will now turn his sight towards a fight with a healthy Joseph Parker or might look forward to a possible fight with Oleksandr Usyk.