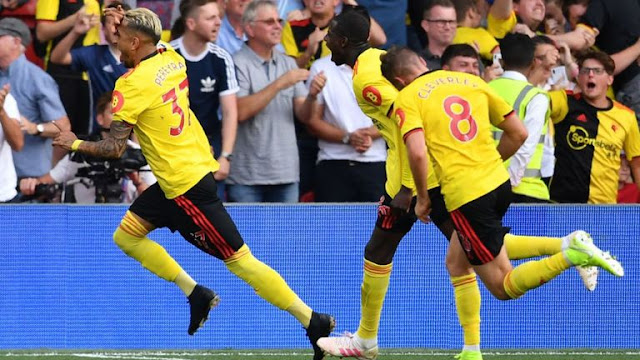 Goal : 21′ 0 – 1 Pierre-Emerick Auba…
Kolasinac picks up the ball when Hughes is robbed on the half-way line and races forwards into space. He looks up from 25 yards out, spots Aubameyang on the edge and the Gabon striker has time to turn and fire the ball inside the near post for the opener.
Watford are furious there was no foul given for Ceballos’ challenge on Hughes to win the ball, but VAR has a quick look and is satisfied.

Goal : 32‘ 0 – 2 Pierre-Emerick Auba…
A mix of more slick Arsenal attacking and more poor Watford defending gives the Gunners a second. Ozil slips the ball through the defence for Maitland-Niles to get in behind Holebas, and he crosses for Aubameyang, who has totally lost Dawson, to tap in at the far post.
Dawson also played Maitland-Niles onside for the initial Ozil ball. Not a great few seconds for him.

Goal : 53′ Tom Cleverley 1 – 2
Arsenal just do not learn. Leno tries another dangerous short pass from a goal kick to Sokratis, he tries to find Guendouzi on the edge of the box but it hits Deulofeu, deflects into Cleverley’s path, and he finds the bottom corner from 12 yards.
A comedy of errors but a lifeline for Watford.

Goal : 81′ Roberto Pereyra (pen.) 2 – 2
Spot on from Pereyra, who gives Watford the leveller they richly deserve, sending Leno the wrong way and firing the ball into the bottom left corner.
Vicarage Road is rocking, and so are Arsenal!