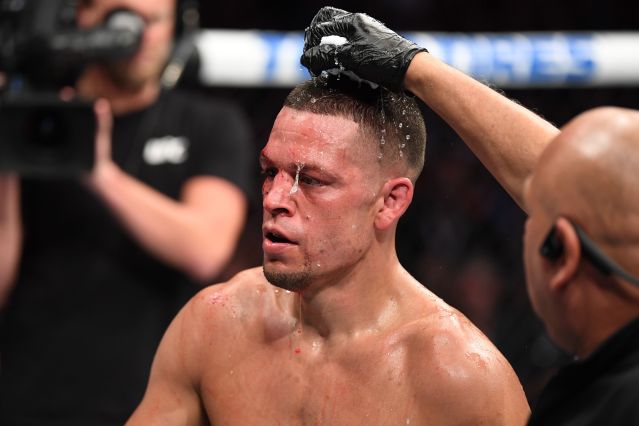 Jorge Masvidal and Nate Diaz have both been on the same track with a possible fight in the future and it seems the UFC is ready to give them both what they are wanting.

UFC President Dana White told ESPN that both fighters will meet in the Headlining bout of UFC 244, which is scheduled to take place at Madison Square Garden in the “Big Apple” with a new Championship belt on the line (The BMF Belt).

Masvidal’s Manager had also confirmed the both on Twitter, after both fighters made the announcement with a few other exchanges on social media.

The Diaz – Masvidal fight immediately erupted following a Nate Diaz’s successful comeback fight against Anthony Pettis in UFC 241 and during his post fight interview, called out Jorge Masvidal, who was also present at the venue.

Masvidal on his part is in the peak of his career and he is coming off back to back victories over Darren Till and Ben Askren, the latter a five second knockout with a flying knee, handing him the first loss of his professional career at UFC 239.

“It is the fight fans wanted to see,” White told ESPN. “Nate Diaz called out Masvidal after his win over Pettis. Everybody has been talking about it. People have been hitting me up on social media, telling me too get it done. I can now announce the fight is done.”

“I’m going to put together a belt for these two, they can fight for the ‘BMF’ belt,” White continued. “It’s one of those fights that is fun, interesting, fans are into it—you want to see for five rounds, yet it’s too big to be a fight night. So we made it a pay-per-view. I will end up stacking this card with killer fights. The main event will be those two.”