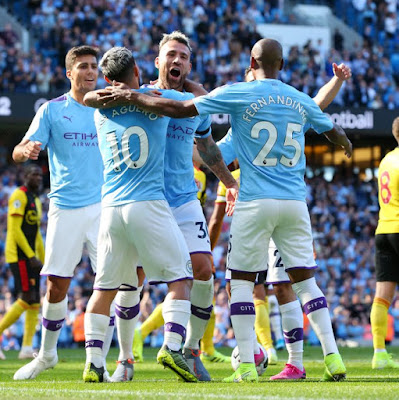 Goal : 1′ David Silva 1 – 0
David Silva opens the scoring within one minute of play. Kelvin De Bruyne send in a magnificient cross from the right and Aguero charges in but it is David Silva who gets there first and converts from close range

Goal : 12′  Riyad Mahrez 3 – 0
Riyad Mahrez makes it three with a deflected freekick, Lashing a shot with his left leg towards goal but this is intercepted by Tom Cleverly’s face which totally changes the direction and clearly past Foster into the net.

Goal : 15′ Bernardo Silva 4 – 0
Bernardo Silva also gets on the scoresheet as Manchester City look to take this away in style. in just 15 minutes, City now have their fourth .De Bruyne sends in a cross and Femenia fails to clear his lines, this fall before Benardo Silva six yards out and he makes no mistake from there.

Goal : 18′ Otamendi 5 – 0
This finally gets embarrassing for Watford , with five goals now they are totally disoriented and city are now taking full advantage, Aguero drifts into space behind FoulQuier before sending in a ball through the six yard box.Otamendi meets it and finishes from close range .

Manchester City look to get back to winning ways with huge motivation gained from their UEFA Champions League victory Shakhtar in the midweek. They will welcome Watford to the Ethiad Stadium with hopes of closing down the five point gap presently between them and League leaders Liverpool.
The Citizens have won their last eleven meetings with Watford and have been able to score twice in every of those games. Their loss against Norwich was their first in 19 games and adding to the fact that the Citizens have won 20/22 games at home, leaves Watford fighting again all odds and actually stand no chance of winning.
Manchester city will be without John Stones, Aymeric LaPorte and Phil Foden when they welcome Watford to the Ethiad stadium. Watford on their own part will captain Troy Deeney, defender Craig Cathcart and forward Isaac Success back in the starting line up