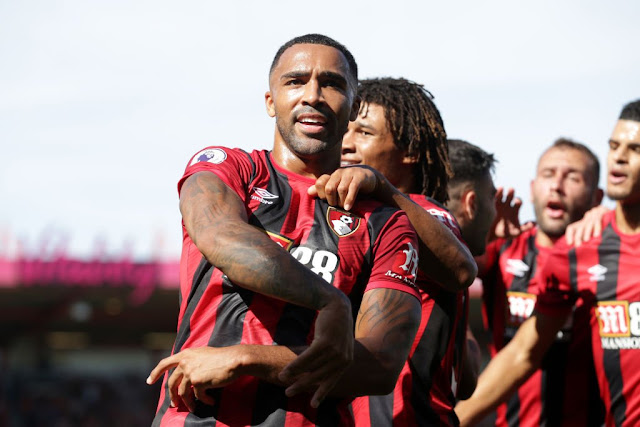 Goal : 23′ Callum Wilson 1 – 0
We have our first goal that game deserves. Everton go to sleep at a set-piece. King gets free at the back post and mis-hits an effort across goal. It loops into the air and Wilson and Ake both go up together – Wilson gets the final touch. Where were the Everton defenders?
VAR has a check to make sure there was no handball from King – and the goal is given

Goal : 44′ 1 – 1 Dominic Calvert-Lewin
Now that is the perfect time to score – Everton were on the ropes but their young striker pops up with a crucial one. Richarlison gets down the right and clips one into the danger zone. Calvert-Lewin rises above Steve Cook and powers one into the net. His first goal in 13 matches.

Goal :
Oh dear – Everton’s defending shooting themselves in the foot here. Richarlison gives away a silly free-kick on the left wing. Fraser steps up and whips in a low centre that doesn’t look to be causing too many problems but Delph takes a wild swing with his wrong foot.
That deflection leaves Pickford unsighted and the ball flies into the net. Could be a Delph OG – but Fraser runs away claiming it.

Goal :
This could be game over and once again, Everton are their own worst enemies at the back. Rico spots the run of Wilson who somehow gets behind Mina and Keane with such ease.
Pickford comes out to meet the striker but he’s cool enough to loft a super finish into the far corner. Pickford scratches his head – that was all too easy.
.