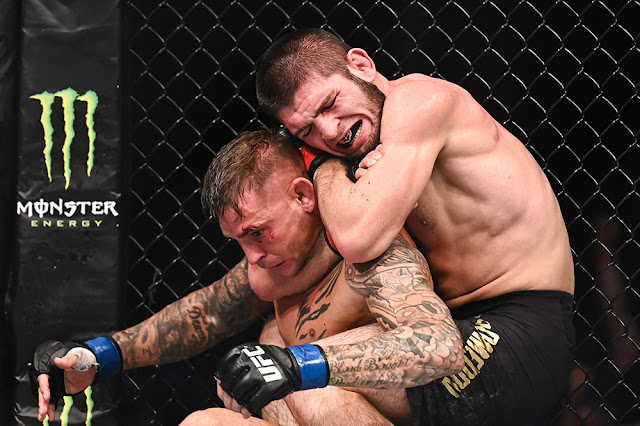 Poirier started out the aggressor in the early rounds peppering Khabib with Leg kicks till Khabib decided to up his game, firing in some combinations then went him for a take down of his own .

Despite failing to successfully bring Poirier down with his first attempt, Khabib held onto one of his legs till he was abke to bring him to the canvas and while Poirier tried to scramble away, he gave up his back and Khabib had a full mount.

Khabib then went in for the choke but failed due to the resistance from Poirier and the fence. Poirier was able to get back on his feet but Khabib was just too much on him and him he was sent back to the canvas.

Poirier again tried to get back to his feet and hand Khabib another full mount near the fence but Khabib was only able to land ssom few punches before the first round was over.

Poirier again started the second round with kicks, Khabib tries a flying knee Poirier retaliates with some tagging and that backs the champion off. That hurt khabib and Poirier capitalized landing numerous blows to the chin of the champ but immediately Poirier lands a good body shot Khabib goes for a take down.

Poirier looked to capitalize and went in for the Guillotine choke but Khabib escapes and gets a top position close to the fence, then went on to TagThimhup with some short punches.

Poirier held himself with patience and was able to get back to his feet but Khabib wasn’t letting him free and wrestled him back to the mat temporarily and even after getting back to his feet wasn’t able to make progress  as he was held down to the fence.

Poirier then lands an elbow, forcing Khabib to break loose before the time elapsed, leaving Poirier shy of his follow up punch.

The third round was however the final round, as both fighters went toe to toe with Khabib standing up with Poirier for some seconds before shooting for a takedown. Poirier looks to capitalize and went in for the guillotine choke and almost looks successful but Khabib keeps his composure.

Khabib gets free and eventually works his way to the top, when in for the choke and this time slipped his hand under the neck and succeeded, Poirier tapped out and Khabib retained the belt.

The fight ended at exactly 2:03 of the third round.

[…] rankings and in his last outing came up short to becoming the undisputed champion in the division in his submission loss to Khabib Nurmagomedov back in UFC 242 in September last year. However, despite his recent issues with getting an exciting fight, which has prompted his push for […]