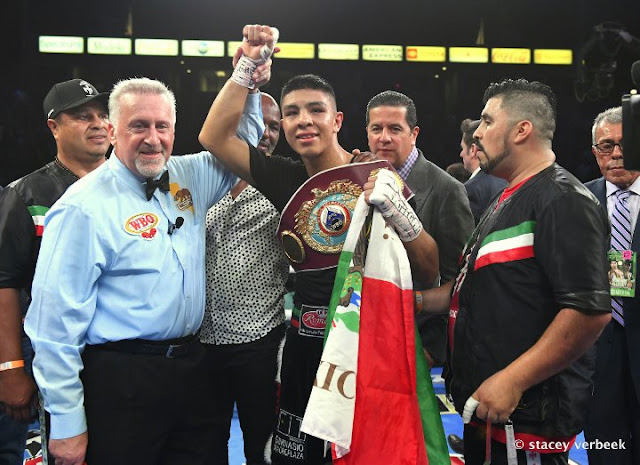 Jaime Munguia made little work of his challenger Patrick Allotey, dropping him thrice before stopping him in the fourth round of their fight on Saturday night.

The WBO Junior Middleweight Champion Jamie Munguia isisaid to be on his way to the 160 pound limit, after struggling in his fight against Denis Hogan and this fight to make the 154 limit.

Allotey had a decent record going into the fight, winning his last six fights but all those in his hometown Ghana and has not lost a fight since 2016, when he lost to Kanat Islam.

Allotey was stronger in the first round, attacking Munguia with body shots and using some good movements to harm the Champion but in the second round Munguia showed more determination, attacking more and began causing damage.

The third round was the beginning of the end as Munguia dropped Allotey with a series of body shots but the Ghanaian made it up and complained of low blows and was given time to recover.

Munguia dropped Allotey again after the restart with some aggression before the bell was heard. During the break Allotey looked like he wanted to quit but reluctantly made his way to the center.

Munguia fired all his arsenals at Allotey attacking him to the body and the Ghanaian took a knee, which was the point his corner decided to end the fight.