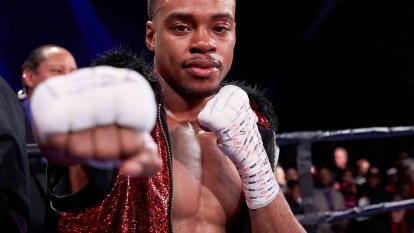 IBF welterweight world champion Errol Spence has promised to hand the WBC champ Shawn Porter a one sided beating when they both meet in a unification battle on the 28th of September on Fox Sports Pay-Per-View at the Staples Center in Los Angeles.

Shawn Porter defeated Danny Garcia to win the WBC Welterweight title and has so far defended it one’s with a unanimous decision victory over his mandatory challenger Yordenis Ugas back in march.

Spence was last seen in the ring fighting Mikey Garcia, who went up two divisions to face the pound for pound star. An adventure that ended with him getting smacked around the ring and ended up losing a decision.
The fight which was Spencer’s biggest career win had Spence with the bigger advantage in size and reach but in his upcoming fight with Porter, he is smaller in terms of size and power.
This doesn’t seem to deter him from focusing on his intentions ahead of the fight and Just like he did Garcia, he intends to punish Porter and dish out another one sided Beating.

“I already have it in my head that I want to punish Shawn and get an impressive knockout,” said Spence. “Nothing he can say can stop me. That’s my mentality come September 28. I have a lot of dog in me, I’m a guy who always comes to fight. I’m going to do what it takes to win.”

“This fight ends in a spectacular knockout by me. I’m going to punish him. I’m going to beat him up mentally and physically. I’m going to have him distraught in the ring. Then, I’m finishing him,” Spence added.

“He doesn’t have the skills to beat me. I’m not worried about Shawn boxing like he did with Ugas, or what he did with Danny Garcia. He’s going to have no choice but to come forward.”