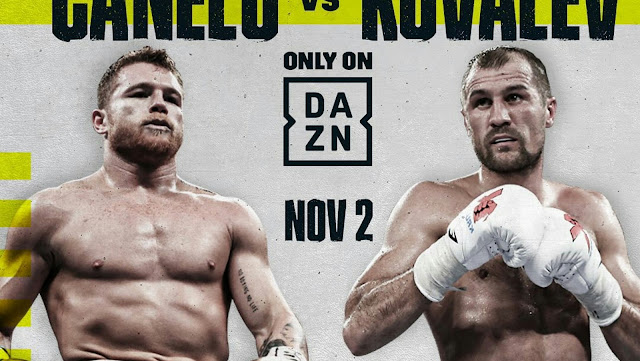 Canelo Alvarez has just confirmed he will face Sergey Kovalev in order to conquer a 4 weight category?#CaneloKovalev ; November 2, 2019.

The 36 year old SergSe Kolalev will be fighting in his 17th consecutive world title fight, having gone through serious battles that has seen him lose his titles twice Controversially to Andre Ward and an upset against Eleider Alvarez. However, he since overcame the defeat, knocked out Alvarez to regain his title and most recently defeated one of the most promising youngsters I  the division Anthony Yarde In his last outing.

Canelo Alvarez is hopihopin become a four division chanoion and looks to break another record and with a win against Kovalev, he will become the second Mexican to claim a title at Light Heavyweight since Julio Cesar Gonzalez earned a title in the weight division back in 2003.

“The second phase of my career is continuing just as we had planned, and that’s why we are continuing to make great fights to enter into the history books of boxing,” said Canelo Alvarez. “That’s also why I’ve decided to jump two weight classes against one of the most feared champions of recent years. Kovalev is a dangerous puncher, and he’s naturally the bigger man, but that’s the kind of challenges and risks that I like to face.”

Sergey Kovalev had onyo Praises for his challenger and also threw some admiration for Canelo’s zeal to become the best  which isn’t possible without” fighting the best. He then ended his speech with a big thanks to every one who made the fight possible.

“In order to be the best you have to beat the best. I have always tried to fight the toughest opponents in my division, but many have ducked me throughout my career. Canelo wanted to fight me; to step up to higher weight and challenge for my belt. I will be ready on November 2nd. Thank you, Main Events, Kathy Duva, Egis Klimas, DAZN and Canelo for making this fight happen.”