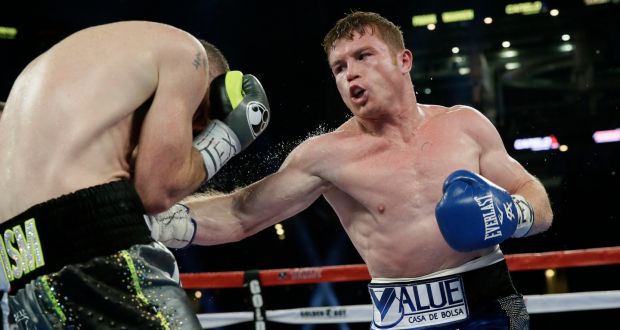 Sanchez also gave some predictions ahead of the Nov. 2nd fight between Canelo Alvarez and Sergey Kovalev, which might possibly end up the biggest fight this year. Canelo Alvarez moving up two weight divisions to fight Kovalev, who has spend almost all his career at Light Heavyweight and has ruled the division for sometime even became a unified champion ones and knocked out his mandatory challenger (Anthony Yarde) in his last fight.

“Canelo stops him somewhere between the 7th and 9th round with a good body shot but he is going to work the body until he gets the perfect shot,” Sanchez explained.

Alfredo Angulo picked up the biggest win since the turn of the new decade by defeating Peter via Split Decision against all odds (30-1 undeerdog) on Saturday night in the main event of Premier Boxing Champons on FS1. This was masterminded by Abel Sanchez, who has been known over the years for his work with former middleweight king Gennady (GGG) Golovkin , former Cruiserweight world Champion Murat Gassiev and Terry Norris.

Sanchez credited the  win to Angulo’s dedication to the boxing science and his discipline,being persistent and due to the fact that he knows his age is no longer an advantage.

“We had him in camp for almost a year and a half and he fought only one time but he was persistent. He stayed in the gym and he worked very hard and he did everything I asked of him. He knew where he stands. He is 36 years old and he knows there aren’t that many fights ahead of him so he gave it his all and go the victory,” said Sanchez.

Sanchez claims he knew from Angulo’s competitive performance early in the fight, that he will be able to pull off the victory.

“We know that Alfredo is a slow starter. Everyone knows that. If we could stick around in the beginning of it and not get blown out I thought that we could win a decision,” Sanchez told BoxingScene.com. “It was all the body work and he landed some good shots to the head but I think the consistent body work weakened his legs at the end.”