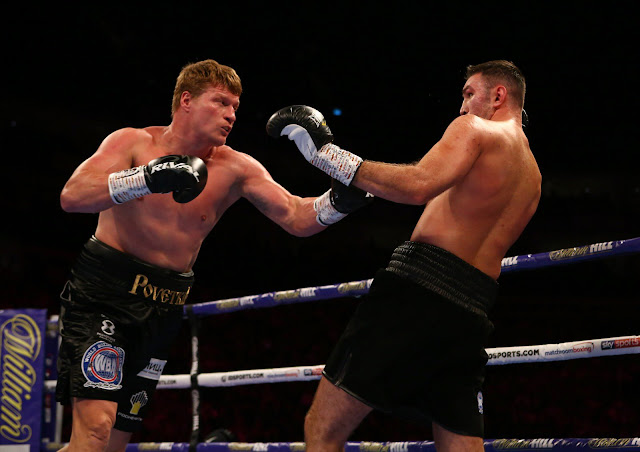 Alexander Povetkin prolonged Hughie Fury’s trip to the top of the heavyweight division with a unanimous decision victory over the British fighter at the O2 Arena on Saturday night.

Povetkin (35-2, 24 KOs) who was fighting for the first time since been knocked out by former Unified Heavyweight champion Anthony Joshua, handed Fury (23-3, 13 KOs) his third Unanimous Decision loss in the last two years.

Fury had been the most active fighter of the two, having only fought two months prior to this fight, when he stopped Samuel Peter in the seventh round. While Povetkin’s last fight was eleven months before their fight. Povetkin went on to dominate and out work the Brit.

Povetkin connected a short right hand early in the first round but Fury waited till his time came, when he forced a clinch and connected a right hand and a left of his own before the end of the round.

Fury’s pent most of the second round staying safe and trying to use his Jab and in the third resulted to holding but Povetkin still had his way sneaking righthands behind his guard.

Povetkin landed some heavy right hands in the fourth and in the fifth and sixth, Fury tried making progress with his jab but this didn’t prevent the 39 year old from being aggressive.

In the seventh round, both fighters connected well with Fury landing the heaviest with a overhand right hand, while Povetkin a looping shot.

Povetkin opened up a cut on the left eyes of Fury and finishing round nine with a two big rights, which prompted Fury to run all through round 10.

In round eleven Fury became aggressive, charged at Povetkin and while charging forward got caught with a right hand, midway through the eleventh round.

Fury didn’t show urgency in his game, as it was clear he was behind on the scorecards. He continued his business of holding and moving but got caught with a big right which snapped his head backwards hundred seconds before the end of the round.