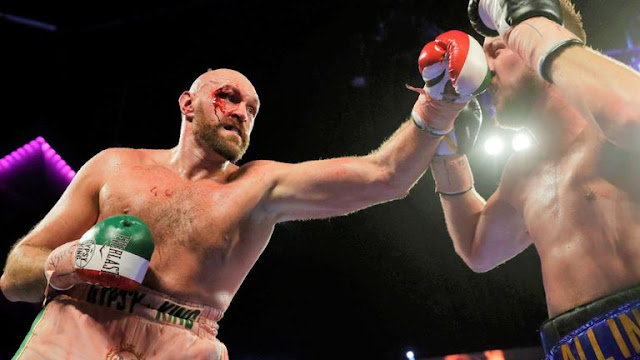 Lineal Heavyweight champion Tyson Fury was forced to dig deep for a victory against Otto Wallin in his adventure impersonating Mexican culture on the 14th of September in Texas.
Tyson Fury who made his way out of the dugout in Mexican colors and even his gloves were green white red but  instead of showing off his superiors or make a statement, he was forced to struggle from the third round due to a nasty cut.
Fury got bloodied and knocked off balance but through his adopted Mexican heart was able to earn a unanimous decision victory over Wallin with 116-112, 117-111, 118-110 at the T-Mobile Arena on saturday night.

El Rey de los Gitanos  as he called himself the last one week, was in crisis after the clash of heads and despite his complain, the referee ruled it a result of a legal punch. This left Fury disorganized.

Fury kept complaining he was headbutted but Wallin senced a loop hole attacking Fury with all his Arsenal. By the sixth round Fury was totally full of blood and had to convince the referee to let the fight go on.

Fury was more dominant in the seventh and was able to connect his two best shots, two big right hands and turned the fight to his favor, weighing down Wallin with his size and weight and by the ninth Wallin just did enough to survive.

Wallin was now forced to be defensive and Fury got on connecting bodyshots and got Wallin bloodied. But in the last round Fury was again forced to hang on, Stunned and had shaky legs but held in to the end of the round.