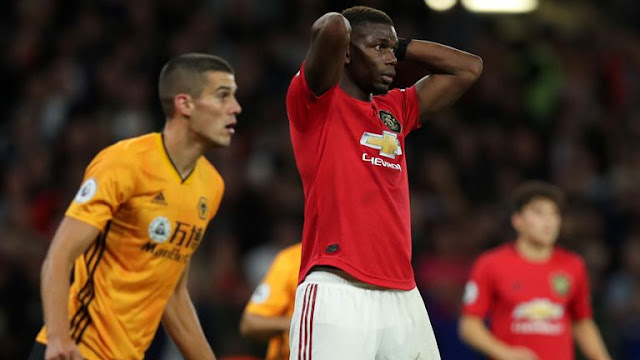 Lingard, Rashford, Martial show their class!
Attacking at pace – it’s the Solskjaer way. Lingard is found by Shaw down the left and United up the ante. He feeds Rashford who slips in Martial down the left edge of the box and he smacks a high finish into the net.
He wants to be played through the middle – and he’s rewarding that faith. United in control now. Wolves must come out. 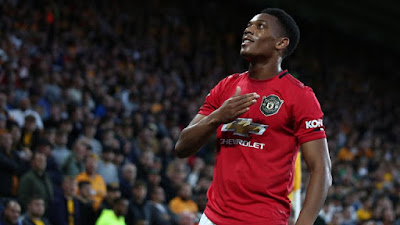 Goal : 55′ Ruben Neves 1 – 1
There was nothing wrong with Neves’ strike but the problem was whether Moutinho was offside in the build-up to the goal down the right. As you can see below, he was level as he was behind the ball.
In the VAR drama I haven’t bigged up Neves’ strike enough. It was a real corker. Watch it in a moment. WOLVES ARE Level.

Penalty Miss : 68′ Paul Pogba
Coady trips Pogba…..Superb link-up by Rashford and Pogba. It ends with the Frenchman cruising into the box and there’s contact between him and the Wolves skipper. The referee points to the spot. VAR takes a look and sees the contact.

The United man goes for power but the goalkeeper flies across to push it to safety. It was a good height for the stopper. Pogba looks to the skies.

Wolves will host Manchester United at the Molineux on Monday night (8pm kick off)  in their second Premier League game of the season.

Nuno Espirito Santo’s men will be hoping to get their first three points of the season from United, after battling with Leicester City to a goalless draw, in their last outing at the king power stadium.

Manchester United, on the other hand, ran away 4 – 0 winners over top four opponents Chelsea FC on Sunday and will be in high confidence going into the game with Wolves. However, Wolves defeated Manchester United in their last two meetings and will definitely pose a difficult opponent for Ole Gunnar Solskjaer’s team.

Wolves have not been on the losing side (over 90 minutes) for quite a while and have been the only side outside the top six teams to evenly match Manchester City, an 0 – 0 draw in the Premier League Asia Trophy Semi Final.

Manchester United overcame a bad Premier League ending with a good Preseason, capping it with a big win in the first game of the season. However, United looked very scattered early in the game and against Wolves, who look very organized and tend to concede very few goals, that could be bad news.