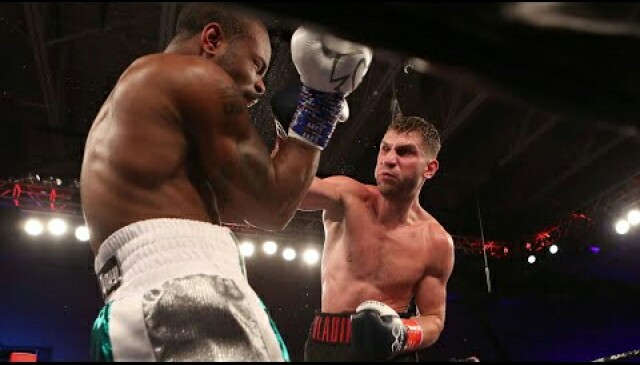 Unbeaten super middleweight Vladimir Shishkin (9-0, 6KOs) delivered some wonderful boxing in the gradual wear down and stoppage victory over DeAndre Ware (13-2-2, 8KOs) in the SHOBOX main-event on Friday night at Broken Arrow, Oklahoma.

The fight was stopped by Ware’s corner at exactly 2 :40 minutes of the eight round, after the American was left defenseless byvan accumulation of punches.

Shishkin was dominant from the first round landing 95 punches and didn’t slow down at all after that, connecting 254 of 656 total punches, with most of them powershots.

The fight gave signs of a knocked ending in the mid rounds and this was made known to Ware by his corner and the truth that he might not last long after then, if he kept on receiving that much punishment.

Shishkin continued dishing out the punishment to Ware and by the seventh round Ware was completely down and defenseless prompting a full charge from Shishkin but Ware held on and survived the round.

After failing to force a stoppage in the seventh round, Shishkin continued his charge till his golden moment came in the eight round when the punishment on the brave hearted Ware couldn’t be taken any longer by his corner. They threw in the towel.

Shishkin won for the fourth time via knockout in his first fight in the US.