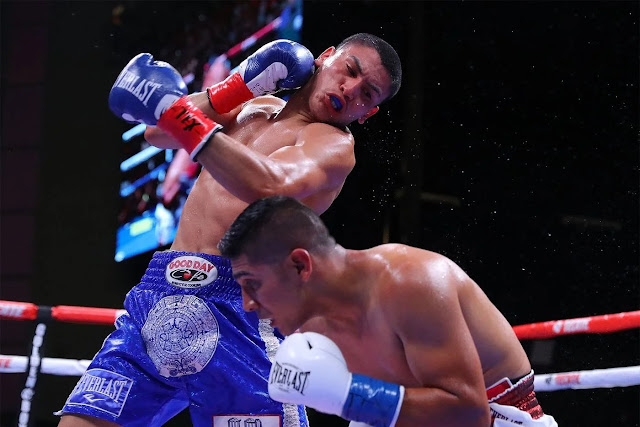 Vergil Ortiz Jr. produced a spectacular performance on Saturday night, dropping Antonio Orozco, the biggest opponent he has faced three times before stopping him in the sixth round at The Theatre at Grand Prairie in Grand Prairie, Texas.

Ortiz (14-0, 14 KOs) has definitely moved beyond the “prospect” status, as Orozco was regarded as one of the Contenders in the Welterweight division and was never knocked out before losing to Ortiz.

Ortiz wasn’t happy with his performance and expressed his unhappiness during the post fight interview and maintained that, he is still in the learning process.

“I’m gonna be honest, I don’t like the way I did in the fight,” Ortiz told DAZN’s Claudia Trejos during his post-fight interview. “I don’t even know how many rounds we went. That’s how into the fight I was. But I wanna say like the first three, four rounds, I could’ve done a bit better. I definitely got a long way [to go] as a boxer to reach that world champion status. But we’re gonna make those improvements. We’re gonna learn from this fight.”

Ortiz who was entered the sixth round for the first time as a professional  fought off a Orozco in a fight that had knockout smelling from the first round, each round except the fifth saw either fighter get wobbled or stunned.

The six round was the most eventful in the fight and had all three knockdowns and the stoppage. Orozco had taken all that Ortiz gave him till he got caught with a upper cut in the sixth round, which saw him get down on one knee.

He got caught with a left hook that sent him down flat on his back this time before the referee stopped the fight at exactly 2:16 of the sixth round.