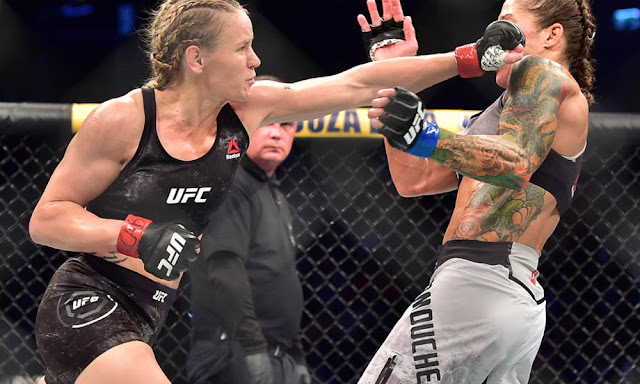 Valentina Shevchenko retained her UFC Flyweight title with a unanimous decision victory over Liz Carmouche in Rematch on Saturday night at the Antel Arena in Montevideo, Uruguay.
With the win, Shevchenko avenged her loss to Carmouche, who really had little to offer in terms of offense. The fight was scored 50-45, 50-45, and 50-45 for Shevchenko.

“My strategy was to use all my skills to defend her,” Shevchenko said following her second straight title defense. “She has very uncommon techniques, style and timing. So I did everything to assure my victory inside the cage.”

The first two rounds had little action and got the Fans reacting. Shevchenko threw some combinations and looked ready to counter but didn’t get such opportunity , as Carmouche was comfortable sitting in a defensive stances and avoiding damage.
Shevchenko changes that in the last two minutes of the third round, where she lunched forwards with a serious combination, dropping Carmouche to the canvas but didn’t dive down to grapple with her  instead decided to kick her legs.

After a while, she grabbed Carmouche and threw her on the canvas but wasn’t able to land enough offense on the ground due to their position locked against the cage wall.

Shevchenko made the fight better when she decided to attack more in the fourth round, she dropped and controlled Carmouche on the ground for most of the round but not really causing real damage with her strikes.

Shevchenko landed the biggest shot of the round on Carmouche, when the later tried to score a Take down of her own. A spinning back fist that drilled Carmouche, as she advance.

By the final five minutes,MIT was clear the winner will be the champion, as she continued her dominance, pressing forward and landing combinations, mixing it between Take Downs. Carmouche just played defense till the final bell.

This was Carmouche’s second try at a UFC title..