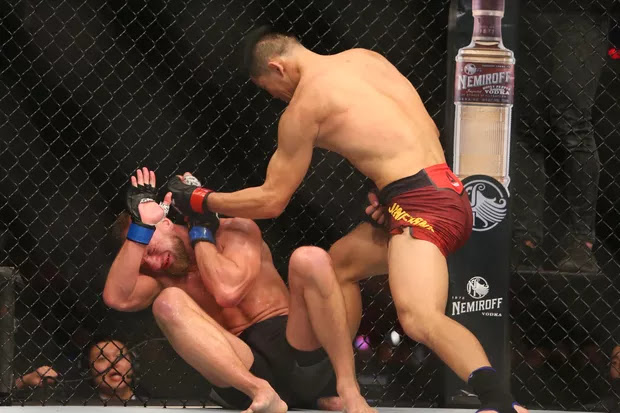 Li Jingliang grabbed the biggest win of his career with a third round knockout of highly rated Brazilian fighter Elizeu Zaleski dos Santos (21-6 MMA, 7-2 UFC) ,Eddings him with just a couplecof seconds left in the final round of UFC on ESPN+ 15 main event.

The Welterweight fight had already been on the way to a sure decision win for Jingliang but with the second knockdown, there was no way, he wold just settle for a decision at Universiade Sports Center in Shenzhen, China.

Zaleski was the best fighter in tbe first round scoring a takedown but couldn’t capitalize and even wobbled the Brazilian peppering him with leg kicks but Jingliang waited for his turn and when it came, landed a big right hand that sent Zaleski to the canvas  though momentarily, afterwhich he avoided further damage till the end of the round.

The Second Round had less action, as compared to the first,with Jingliang landing a right before both settled for leg kicks but Zeleski was looking out for any available openings.

The third round was fire and drew a loud reaction from the spectators. Jingliang sent Zaleski to the canvas twice butbwasntw able to capitalize on those opportunities

Jingliang dropped Zaleski withwa well connected right hand towards the last seconds of the final round and went in fifth finish but Zaleski made it back to his feet , still Jingliang never relented. He continued his blows on the Brazilian till he dropped. And that was the end.