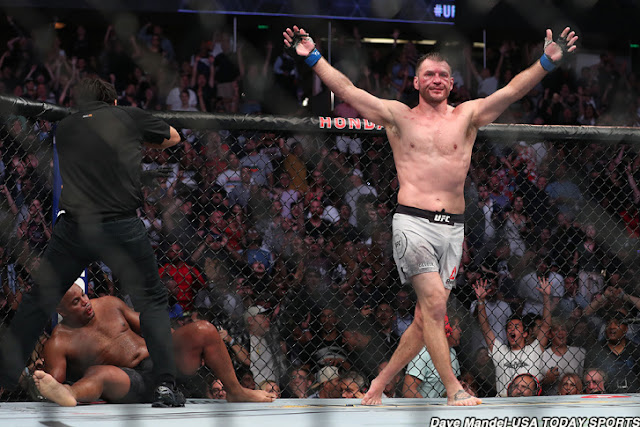 Stipe Miocic defeated Daniel Cormier via via knockout in the fourth round to reclaim the UFC heavyweight title at UFC 241 main event on Saturday night.

Stipe Miocic stopped Daniel Cormier with a flurry in the fourth round  at exactly 4: 09 of the main-event, handing him his first loss at heavyweight and snapping his seven fight winning streak at the Honda Center at Anaheim, California.

Cormier started out perfectly striking and eventually made a statement in the first round and even when Miocic tried to grapple, Cormier raised him up, walked around before slamming him on the mat.

The fight was much different in the second, a serious back and forth affair with both fighter thinking less about defense and both landing wicked shots but Cormier ended up winning the round again.

The third round was much slower and less action as the second but Miocic was fresher than Cormier and landed better than the champion and even scored the first knock down. Cormier on his part landed some of his own but he was clearly fading.

“I just saw some weakness in that third round, then in the fourth round I caught him with that right hand,” Miocic said. “Thank God, because that mother(expletive) is tough.”

Miocic was clearly in charge in the fourth round, picked up the pace, as Cormier had no answer. He landed a big right hand on Cormier, which rocked and crumbled him and Miocic onloaded on him till the referee waved off the fight