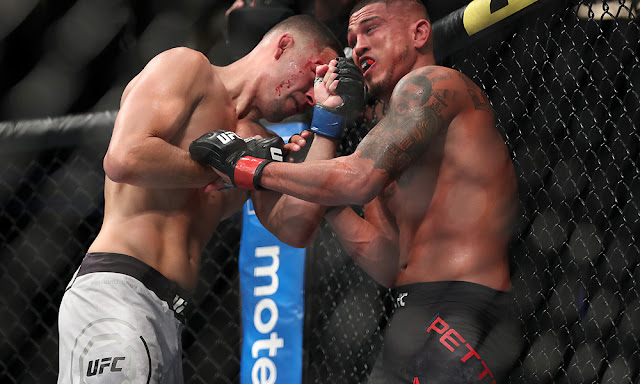 Nate Diaz (19-11 MMA, 14-9 UFC) defeated former champion Anthony Pettis (22-8 MMA, 9-7 UFC)  in grueling back and forth fight at UFC 241 co-main event at Honda Center in Anaheim, California. Live on ESPN Pay Per View.
Diaz drilled Pettis with so much power and accuracy that it was no news he was the winner when the fight went to the scorecards. Credit to Pettis for his heart.
The fight was scored 30-27, 30-27, 29-28 for Diaz, who fought for the first time since losing a Unanimous Decision to Conor McGregor and credited his long layoff to the the fact that “Everybody Sucked And There Was No One To Fight” .

“The reason I was off is because everybody sucked, and there was nobody to fight,” Diaz said. “With this belt, I want to defend it against … Jorge Masvidal had a good last fight.

“All respect to the man, but there ain’t no gangsters in this game anymore. There ain’t nobody who’s done it right but me and him. I know my man’s a gangster, but he ain’t no West Coast gangster.”

Diaz scored a takedown and scored more points with a ground and pound, hindering his escape with a perfect back control.

Diaz went in for a takedown early in the second round but his efforts were greeted by a right hand from Pettis, who went on to try a kimora finish but Diaz took top position.

Both fighters went back to the clinch and Diaz was the victor in that, landing elbows in close range that left Pettis fading and trying to escape.