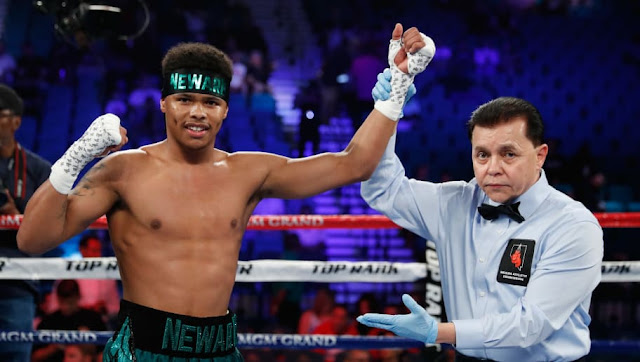 Shakur Stevenson will fight Joet Gonzalez for the vacant WBO featherweight title as ordered by the World Boxing Organization. The title which was recently vacated by undefeated titlist Oscar Valdez, who has chosen to move up in weight for his next bout.
The sanctioning body has called on the promoters of both fighters to begin a 30 day negotiation period after which a purse bid will be order, if both parties fail to come to terms within the period.

“Please be advised the parties have thirty (30) days upon receipt of this letter to negotiate and reach an agreement regarding the Vacant WBO Featherweight Championship Contest between Shakur Stevenson and Joet Gonzalez,” Luis Batista Salas, chairman of WBO championship committee stated in a letter submitted to Rank and Golden Boy Promotions (Gonzalez’s promoter) on Tuesday.

“If an accord is not reached within the time frame set forth herein, a Purse Bid will be ordered pursuant with the WBO Regulations of World Championship Contests.”

Stevenson defeated Christopher Diaz via a twelve round Unanimous Decision back in April to ascend into the WBO featherweight No. 1 spot and most recently knocked out Alberto Guevara in the third round in July.

Joet Gonzalez will be delighted with the order, as he has been gunning for this since knocking out Manuel Avila in March, his first fight in 2019.

The order by the WBO leaves Golden Boy Promotions and Top Rank with nothing but a 30 day negotiation period to produce an agreement and if they fail, the WBO will stage a purse bid involving all the eligible sanctioning bodies for the fight.