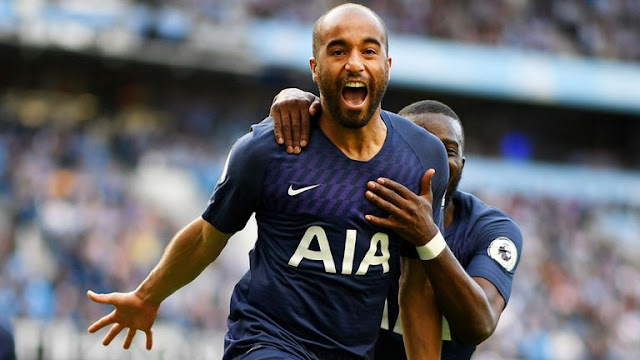 Live Goal Updates
Goal : 20′ Raheem Sterling 1 – 0
Bernardo Silva pushes the ball down the flank then sends back the ball for De Bruyne, who drives in towards Goal before finding Sterling, who head home into the far corner.

Goal : 23′ 1 – 1 Erik Lamela
Ndombele calls on Lamela to come get the ball and he obeys before running towards the box, the Frenchman sends the cross in and Lamela heads home the equalizer.

Goal : 35′ Sergio Aguero 2 – 1
Bernardo Silva again give De Bruyne the ball, who moves pasts Winks and Rose before picking Aguero in the box and one it meets the Argentine, he finishes with a tap

VAR Disallows Jesus Goal (90 +2)
ManCity takes the lead. De Bruyne sends in a cross but Laporte’s header falls loose into Jesus part and the Brazilian moves into the box before firing into the net… VAR reviews and its Disallowed.

Pep Guardiola Manchester City kick started their second Premier League defense with a 5 – 0 win over West Ham United at the London Stadium on Saturday and ended the first weekend top of the Premier League table with goal difference.

This time the Citizens will take on the UEFA Champions League finalist Tottenham Hotspur, who defeated them on their way tt the UCL final late last season.

Just as every other top six Contenders, the Spurs stadium a big chance of defeating the Premier League Champions but the odds still roll in favor of the Citizens, who will be owning the home advantage.

Pep Guardiola’s City will definitely send a big warning to top six opponents with a win over Tottenham Hotspur on Saturday and as usual, it won’t be an easy affair for both parties.