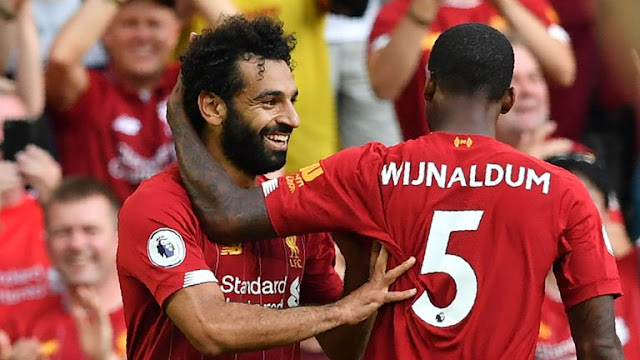 Liverpool take the lead with a wonderful header from Matip. Alexander-Arnold perfect right wing corner is headed past Leno for the opener.

Goal: 49′ Mohamed Salah (pen.) 2 – 0
Luiz is penalized for pulling Salah while both chased at Firmino’s sublime flick in the box. A penalty is awarded and Mo Salah doubles the lead for the Reds from the spot, sending Leno the other way.

Goal : 58′ Mohamed Salah 3 – 0
Salah Scores his second and third for the Reds, as they seem to have secured the available three points. Mo Salah again quickly dribbles David Luiz before breaking free and while racing towards goal fires a low shot past Leno.

Goal : 85′ 3 – 1 Lucas Torreira
Aubameyang does a sweet trick on the Liverpool defense, with a nice pull back for Torreira to fire into the bottom corner

Liverpool FC will host Arsenal FC at Anfield on Saturday, Premier League Match Day 3 as the look to breakout from the early cluster on the Premier League table, while nurturing hopes of repeating last year’s title challenge which saw them end the season just one point behind winners Manchester City.
Liverpool FC have so far been victorious in their opening two Premier League games but have drawn two games against top six opponents this season, first a 1 – 1 against League winners Manchester City and a 2 – 2 against Chelsea in UEFA Super Cup.
Arsenal on the other hand have been victorious in their two opening Premier League games but the winning margins have been very close. A narrow 1 – 0 win over Newcastle United and 2 – 1 Win over Burnley.
Last time Liverpool hosted Arsenal (27 Aug. 2018)  the scoreline was 4-0 against Arsenal at Anfield and according to the look of things Liverpool will still get the better of the Gunners in this one.