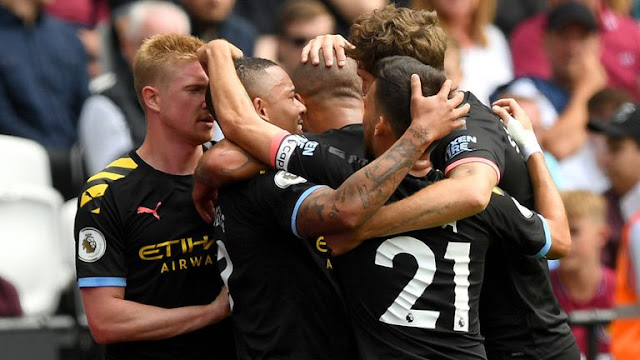 City take the lead, after a blistering run from Kyle Walker, which looks too much for Cresswell and Gabriel Jesus is just in place after the ball comes off diop and with just a little touch from him the ball slips past Fabianski.

Goal Update : 51′ 0 – 2 Raheem Sterling
Sterling doubles City lead, after a masterful display of football from Kevin De Bruyne takes out Balbuena and then plays Sterling through on goal and the Brit makes no mistakem sending the ball through Fabianski’s legs

Raheem Sterling makes it three for City, after Riyad Mahrez plays a bouncing ball in for him and he immediately lobs Fabianski from 12 yards.
VAR…  investigates for offside then gives the goal

Goal : 86′ 0 – 4 (pen.) Sergio Aguero
Manchester City finally doing a Liverpool, Aguero steps up to take the penalty caused by a poor clearance from Fabianski. He plays it directly into his arms but this is to be retaken, according totthe referee.

Manchester City will begin their second defense of the Premier League title with a trip to London to face West Ham United, six days removed from their victory over Liverpool FC which also saw them retain the Community Shield.
The Citizens haven’t lost any of their last six games in 90 minutes and have only lost to Wolves via penalty in the Premier League Asia Trophy Final. Other than that, they have been victorious in every outing and will be in incredible form heading to the encounter with the Hammers.
The Hammers and the City both shared the field during the Premier League Asia Trophy Semi Finals, a game that saw City emerge 4 – 1 winners, as the Hammers were no match for the electrifying Citizens. The Hammer eventually got knocked out of the competition by Newcastle in a battled that ended a goal to nil.
Manchester City on records, have a clear advantage over the Hammers as they have defeated them in their last six Premier League outings and have been made clear favorites by the bookmarkers in this one.
West Ham United however, have bolstered their squad with new additions this summer, especially with the arrival of Sebastian Haller, who performed greatly last season and was able to finish the season with 15 goals for Eintracht Frankfurt.
The Game should be an easy task for Man City but as usual, the Premier League is full of surprises  any thing can happen. I see West Ham best chances coming from a counter after absorbing enormous pressure from the City attack.
Team News