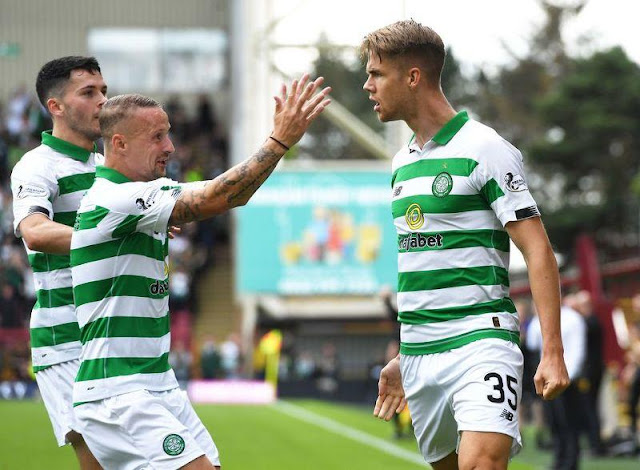 Motherwell kick off the scoring against the Champions, Gallagher heads a ball down to the edge ofothe areaafor Donnelly and he blasts a shot past Bain, who hesitated before diving.

Goal : 14′ 1 – 1 Kristoffer Vassbakk…
Celtic level the scores within two minutes. Ajer overlaps Forrest, who couldn’t track back and meeting the Motherwell defense asleep, he fires past Gillespie with ease.

Goal : 41′ 1 – 2 Leigh Griffiths
Griffiths scored his first goal in nine months, sendingsin a wonderful free kick past Gillespie, who realized late the space he left uncoverred. He sure knows how to celebrate. Celtic take the lead.

Goal : 66′ 1 – 3 Forest
Celtic now leading withwtwo goals. A good build up between Bolingoli and Morgan  who upened up the Motherwell defense. Bolingoli then passes Forrest the ball and despite the pressure, Forrest kept calm and sluts the ball in for a two goal lead.

Goal : 76′ 1 – 4 Odsonne Edouard
Celtic now sure of a win, as Odsonne Edouard, after a wonderful under pressure effort by Ntcham sets him up and from the edge of the ball fires in the fourth Goal for Celtic.

Goal : 86′ 1 – 5 (pen.) Ryan Christie
Motherwell concede a penalty, Dunne shoved Edouard off the ball after he was played through by Brown. Christie steps up fires the ball into the top corner.

Celtic made a statement in the Scottish League opener against St. Johnstone, trashing them 7 – 0 at Celtic Park and this week, they will face a different challenge on the road against Motherwell at Fir Park.

Motherwell managed a goalless draw against Livingston in their opening match of the season and will be hoping to steal a point or even all three points from the Scottish Champions, who will also be hoping to get back to winning ways after also playing a 1 – 1 draw in their UEFA Champions League qualifyers against CFR Club.

Celtic are the favorites to win this due to their huge form which,  I perceive comes from their early return to competitive football and the superior quality of players they have, as compared to Motherwell.