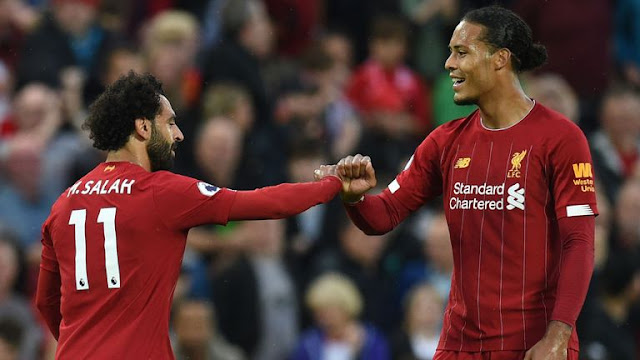 A very awful start for Norwich. Captain Hanley tried clearing off Origi’s low cross from the left side of the box and despite having no Liverpool player around  he mistaken plays the ball into his own goal.

Goal : 19′ Salah 2 – 0
Salah scores his first goal of the season,. Firmino plays Salah on with a nice flick and with very little space left, he takes a little touch and then plays the ball past Krul.

Goal : 28′ Van Dijk 3 – 0
Liverpool are now running the show at Anfield. Salah sends in a great corner from the left and Van Dijk was just there to head in from 10 yard without stress.

Goal : 42′ Origi 4 – 0
Alexander-Arnold send in a searching cross into the box and Origi was just there to finish it off from close range between Center backs

Goal : 64′ Pukki 4 – 1
Pukki reduces the deficit for Norwich, he plays himself into the Liverpool defense, maintains his composure before finishing off a low shot past Allison.

Liverpool FC take on newly promoted Norwich City in the first game of the 2019/20 Premier League season on Friday 9th of August at Anfield.
The Canaries had a very wonderful 2018/19 campaign, won the Championship to earn a return to the Premier League and will wont to announce their arrival with a good show against The Reds away at Anfield.
Norwich had a good Preseason, winning four of their six outings  including a 4 – 1 win over Italian side Atlanta and a 2 – 1 German side Schalke 04. However none of their last six opponents have the magnitude  and quality of players Liverpool will be bringing, leaving them a huge underdog.
Liverpool FC finished last season second with 97 points, missing out on the Premier League title with just a point but were able to clinch their sixth UEFA Champions League Trophy.
The Reds are preparing to start the season but truth be told, they are not on their best form, as depicted from their Preseason performances. I know Preseason games are friendly matches and are most times don’t project the perfect picture of a season but it talks volumes.
Liverpool FC showed their class against Manchester City in the Community Shield but looked sloppy in the final third, especially Mo’Salah, who just like Sadio Mane will be trying to convince Klopp that they are fit after returning late to training after their final reach adventure in the African Cup Of Nations.