Juan Francesco Estrada KOs Dewayne Beamon In The Ninth Round 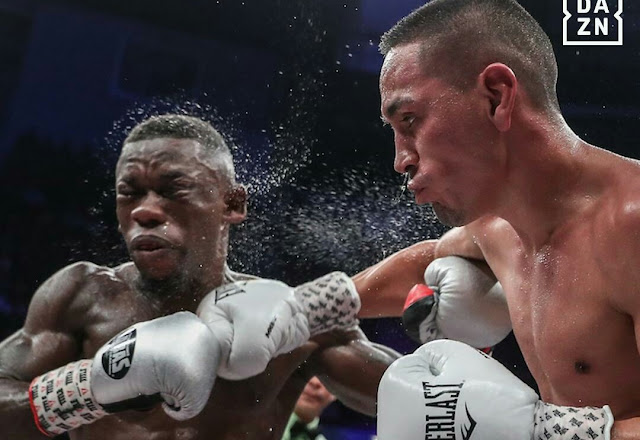 WBC junior bantamweight champion Juan Francisco Estrada successfully defended his title against Dewayne Beamon with a ninth round knockout victory at the Centro de Usos Multiples arena in Hermosillo, Mexico. Live on DAZN in the US and Skysports in the Uk.

Estrada scored two knockdowns in the second round  the first came after he connected an left hook, while the other came as a result of a body shot. Beamon didn’t really behave hurt by those shots and finished the round strong.

Beamon was again left dangling on the ropes when a series of combinations from Estrada left him hurt and dangling head first on the ropes.

Beamon got himself alive in the fourth and fifth round, aggressively attacking Estrada but this didn’t really seem to hurt him and at a point Estrada was seen taunting him with his hands on the ropes, while he attacked.

Beamon also taunted Estrada after his confidence got full due to the performance in the previous rounds  He expressed it with a huge roar into Estrada’s face..

Estrada made him pay in the seventh round  outboxing and rocking him, sent him tumbling with a well connected right hand, followed by a vicious uppercut. Beamon was eventually saved by the bell.

Beamon was bloodied in the eight round and was outmatched by Estrada, who worked him down, detecting the pace of the fight and it was clear the fight was coming to an end.

Estrada finished Beamon off, just 53 seconds into the ninth round. A technical knockout that keeps his climb up the Flyweight division.