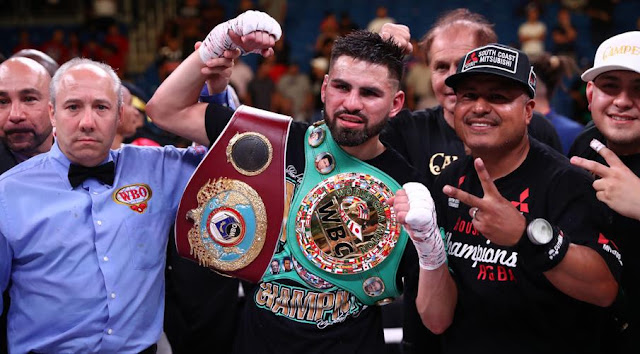 Unified super lightweight titlist Jose Carlos Ramirez is fresh off his unification knockout victory over Maurice Hooker and has now been ordered to face the first of his two mandatory challengers.

The World Boxing Organization has ordered Ramirez to take care of his WBO mandatory challenger, who is presently Britain’s Jack Catterall. This information was released on Tuesday.

Both fighters and their teams have been given a thirty day negotiation period, after which a purse bid will be ordered by the sanctioning body.

“The parties have thirty (30) days upon receipt of this letter to negotiate and reach an agreement regarding the WBO Jr. Welterweight Championship Contest between champion Mr. Jose Ramirez, and mandatory challenger Mr. Jack Catterall,” Luis Batista Salas, chairman of WBO championship committee stated in a letter submitted to both boxers and their respective promoters, Top Rank and Queensberry Promotions. “If an accord is not reached within the time frame set forth herein, a Purse Bid will be ordered pursuant with the WBO Regulations of World Championship Contests.”

Jose Ramirez (25-0, 17KOs) knocked out Former WBO champion Maurice Hooker in his last outing, knocking him out inithe sixth round to unify the WBC and WBO super Lightweight titles. He won the WBC Title with with a unanimous decision victory over Amir Imam in March 2018.

Jack Catterall (24-0, 13KOs) defeated Ohara Davies via unanimous decision to earn his elevation into the mandatory spot. He has only fought in the UK throughout his pro career and will be making his first trip abroad for his first title fight.