Jono Carroll returned to the ring with a unanimous decision victory over Eleazar Valenzuela in the undercard of Estrada-Beamon  which took place at the Centro de Usos Multiples arena in Hermosillo, Mexico.

The fight which was televized by DAZN in the US and Skysports in the Uk had scores scores of 98-92 across all three judges’ cards for the -400 betting favorite Jono Carroll.

Carroll was dominant for most of the fight but also got caught couple of times by the Journeyman, who he was expected to finish in little time and looked very uncomfortable all through the fight.

Venezuela charged forward for most of the fight while Carroll fought on the back foot. His lack of power was evident, as all his punches never seemed to affect Venezuela. However Carroll had speed and for his lack of power made up with flurries.

After the first three rounds which was Carroll’s, Venezuela peppeered Carroll with left hooks and even had him hanging on the ropes, as both fighters slugged it out in the middle of the ring. The Mexican continued his show in the fifth round, making it look very easy to land the hook.

Venezuela had been in control for a while but while charging forward, invited body attacks from Carroll and that gradually weighed him down, by the eight round, he became slow and Carroll picked up the momentum that helped save him on the scorecard. 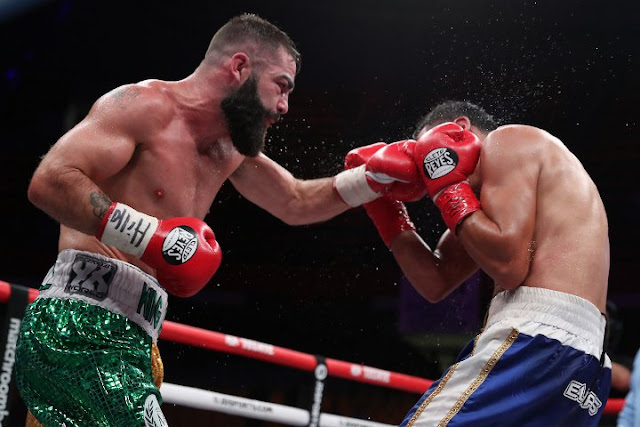 The Ninth and Tenth were more of the same as Venezuela never recovered from his slumber, while Jono Carroll kept landing at without some really issues till the fight was over.