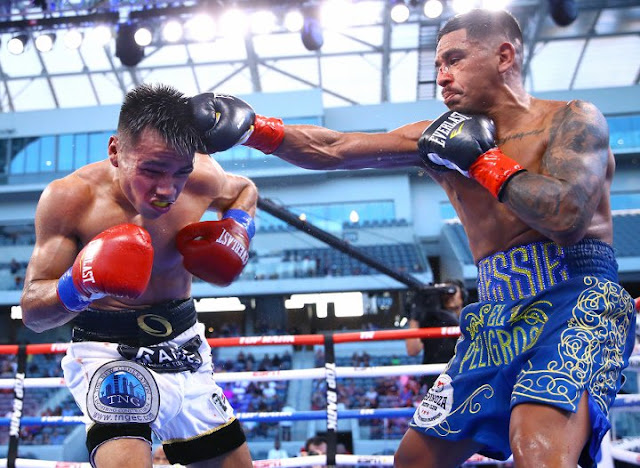 Former Bantamweight Champion Jessie Magdaleno picked up a technical decision win over Mexico’s Rafael Rivera, his second straight win in his bid to become a two division champion with scores 89-81 (twice) and 88-82 at the Banc of California Stadium on USC campus in Los Angeles, Calif.

“I felt strong I felt better than ever,” Magdaleno (27-1, 18KOs) told ESPN’s Crystina Poncher after the bout. “I took off the ring rust and fought smart. We put on our boxing shoes and outboxed him.”

Jesse Magdaleno came into the fight on the back of a points victory over Rico Ramos, which was also his first ring appearance in eleven months and before then lost his Bantamweight title to Isaac Dogboe.

Rafael Rivera was the most dominant in the first round after Magdaleno attested to that after the fight but the second round was much different, as Magdaleno steppedsup his game and was able to slide through Rivera’s punches landing left hooks and right hands from the inside.

Magdaleno was also dominantdin round three but the fourth round was much different, as he called back into a back and fourth battle with the Tijuana native but the round was marred by an accidental headbutt that caused a cut over Magdaleno’s eye.

The cut gave Rivera some motivation to step up and was in charge for the remainder of the round. The fifth round was Rivera foul round, as he landed consecutive shots at the back of Magdaleno’s head and the referee only urged him to fight on.

Magdaleno was back in full force at the start of the second half and through round eight dominated the fight. Early in Round nine, he landed chopping left hand floored Rivera seconds into the round but Rivera lasted only a second on the floor.

The fight was brought to an end by the referee seconds to the end of Round nine after Rivera landed an elbow that caused a dip cut on Magdaleno.