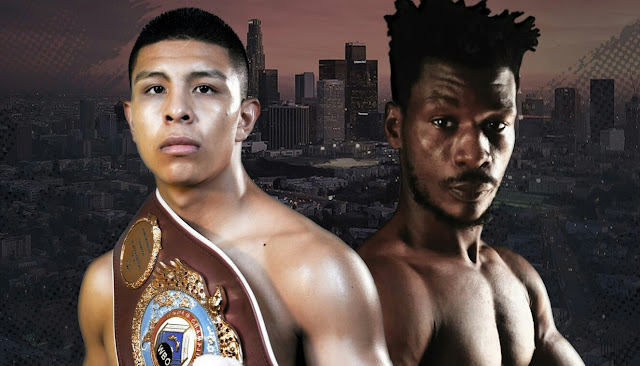 Jamie Munguia (33-0, 26 KOs) will defend his WBO Junior Middleweight World Title against Patrick Allotey (40-3, 30 KOs) at the Dignity Health Sports Park in Carson, Calif. on the Mexican iIndependence Day September 14.
The 22 year old Munguia, who hails from Tijuana, Mexico has defended his title against top fighters like Liam Smith, Brandon Cook, Takeshi Inoue and Dennis Hogan since knocking out Sadam Ali to capture the title in May 2018. He is now set to represent Mexico on this big day.

“I feel very happy for the opportunity of headlining a card on Sept. 14,” said Jaime Munguia. “That’s the best date for boxing in the entire year. It’s a great date for Mexico because that’s when we celebrate Mexican Independence Day. I’m proud and honored to be representing Mexico in the festivals for my country. I’ll give my best and I’ll try to deliver a great fight for all the people and for those who will see us.”

Squaring up against him is Ghanaian Patrick Allotey, who is on a six fight winning streak and despite acknowledging how much of a great fighter Munguia is, promises a surprise.

“I respect Munguia. He is a great fighter,” said Patrick Allotey. “But I’m an African warrior, so you know I’ll be coming to cause a big surprise.”

“Sparrow is basically an undefeated fighter with a good amateur background,” Ryan Garcia. “People in boxing that know boxing will know this isn’t an easy fight. It will not be overlooked.”

“I’m thankful to Golden Boy and Russell Peltz for the opportunity,” said Avery Sparrow. “Ryan Garcia has yet to be tested, and it’s a big step up for him. It’s not much of a step up in opposition for me. It’s his biggest test, not mine. I’m good fighting at 130, but nobody wants to fight me there, so I’m moving up to 135. I look forward to putting on a great show.”