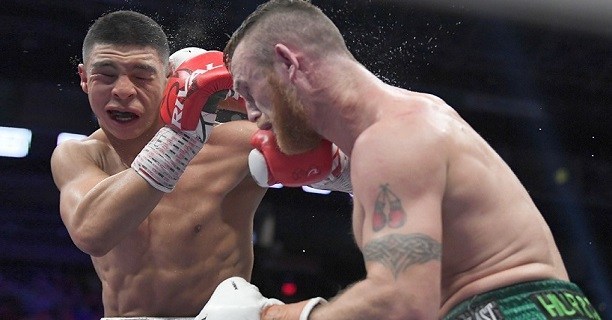 Dennis Hogan’s promoter Paul Keegan has expressed his displeasure in WBO Junior Middleweight World champion Jamie Munguia (33-0, 26 KOs)  defending his title against Patrick Allotey (40-3, 30 KOs) instead of a rematch with his client, after their first fight ended a majority decision.

Jamie Munguia survived an early scare and struggled to earn a majority decision against Dennis Hogan in a mandatory defense on Mexican soil. Many even viewed Hogan as the winner.

Reports flew out, there was going to be a rematch  at least to make things straight but the negotiating phase never really kicked off.

Paul Keegan believes that a defense against Patrick Allotey isn’t the best and a real backward step for the Champion, especially after so much talk of a rematch.

“I think the fight he has picked or his team picked is a huge step backwards. You can understand that they want a fairly straight forward fight after Dennis beating him in his hometown,” Keegan told Irish-boxing.com .

“My respect for him and his team right now is zero , they just want us to go away and not talk about the fight ever again which I won’t do,”

He adds before calling for Munguia and co to main up whilst pushing the proud Mexican button.

“They should be honest with the Mexican boxing fans and say ‘listen we got a gifted decision last time out’ instead of talking like he is the second coming of Canelo.