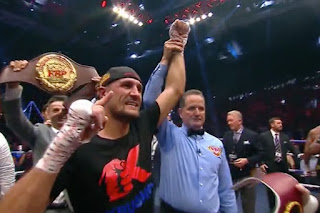 WBO light Heavyweight world champion Sergey Kovalev retained his title with an eleventh round knockout of previously unbeaten British Challenger Anthony Yarde on Saturday night in his hometown of Chelyabinsk, Russia.
Kovalev (34-3-1, 29 KO) was made to struggle in the eight round after Yarde decided to attack the body of the veteran, making him stagger around the ring but couldn’t land that final knockout blow. Kovalev was eventually saved by the bell.
Kovalev used his Jab without blemish and the effectivenes was the key. His stamina was too much for Yarde, who had never gone beyond the seventh round. Yarde got battered, dropped and eventually stopped after losing all his gas at exactly 1 :06 of the eleventh round.

Yarde was the better of the two in the first round while Kovalev spent majority of the round trying to establish his Jab.. Yarde landed some stiff jab that sent Kovalev backwards.

Kovalev had his turn in the second, landing a stiffsjab to Yarde’s face in the second  backing him up. Both boxers couldn’t get their power shots landing in the first three rounds.

Kovalev was already ahead on the cards by the fourth round, landing a clean Jab early in the round and a left before the end of the round.

Yarde looked gassed up by the fifth round and this motivated Kovalev who continued letting his hands go. The Crusher snapped Yarde’s head with a jab  and an over handh right towards the end of the round.

Kovalev continued his dominance in  the sixths round and in the seventh got warned by the referee for a late punch after the referee called for a break.

In the eight round, Yarde blasted Kovalev with some stiff jabs, after both fighters traded toe to toe, hurting Kovalev and making him hold and run till the end of the round.

Kovalev noticed Yarde had lost his juice in the exchanges in Round eight and that motivated him to try ending his inexperienced challenger in the 10th. The round was one sided and Kovalev opened up his Arsenal on Yarde, who could barely hold up his hand.

Kovalev tried to use a flurry on Yarde but this was stopped by the sound of the bell  He had already landed 41 of 92 shots  while Yarde landed 4 of 45 in just round 10.

The fight ended after Kovalev uncoked a huge upper cut on Yarde sent him to the canvas and the youngster couldn’t beat the count.