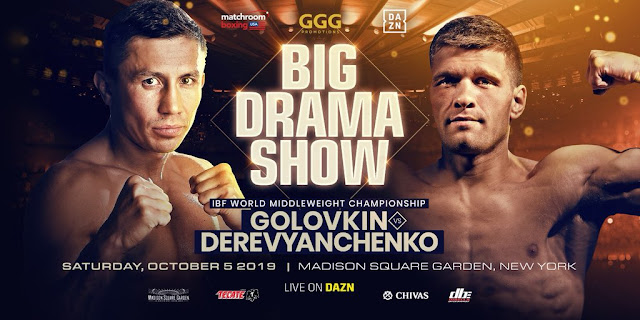 Gennady (GGG)  Golovkin will take on Sergiy Derevyanchenko on the Saturday October 5 at Madison Square Garden for the Vacant IBF Middleweight World Title.

GGG is hoping to find his way back in into the Middleweight title mix, when he defeats Derevyanchenko for the IBF title he held for three years, prior to his getting stripped following his win over Canelo Alvarez.

GGG has knockes out all his opponents at Madison Square Garden, including Steve Rolls who was knocked out in the fourth round of his last outing. That making it 6 Knockouts in his six fights at MSG.

Derevyanchenko will be fighting for the second time in a title fight, the first ended with a Decision in favor of Daniel Jacobs, who retained the title but eventually lost the title to Canelo Alvarez
The Ukrainian recovered from the loss against Jacob with a points victory over Jack Culcay in April.

“I’m very excited that my team has secured another opportunity for me to fight for the Middleweight championship of the world,” said Derevyanchenko. “I have a great deal of respect for ‘GGG’ and look forward to proving in the ring that I will be up to challenge and fulfill my lifelong dream of becoming a world champion. Those in attendance at Madison Square Garden and watching on DAZN will see an outstanding battle on Saturday October 5 – I can’t wait to enter the ring.”

“Everyone knows that I consider Madison Square Garden as my home away from home and there is nothing better than fighting there again. It is old school,” said Golovkin. “On October 5, it’s going to be a good fight. Every time I enter the ring I try to give my fans the fight they want to see, the show they deserve. This will be such a fight. We will bring back Big Drama Show to the ring of The Garden and to DAZN. Don’t miss it. You will see everything you love in the sport of boxing. See you in New York.”