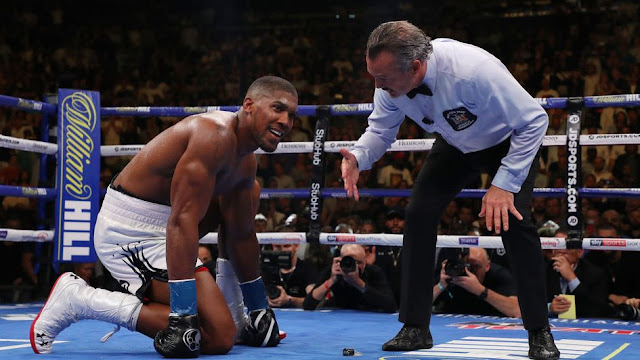 Chris Eubank Jr. believes that Anthony Joshua was a little off the gas during his preparation for the first fight against the present Unified Heavyweight champion Andy Ruiz Jr. and backs him to return stronger in the Rematch.

Anthony Joshua’s will be put to win back the titles Andy Ruiz Jr. ripped away from his shoulders on June 1st, when he knocked him down three times en route to a seventh round stoppage victory.

The Rematch is scheduled to take place on Saturday December 7 in Saudi Arabia, as officially confirmed on Tuesday by Team AJ during a press conference held iniSaudi Arabia.

Joshua’s American debut against Andy Ruiz Jr. will go downdin history, as one of the biggest upsets in the history of boxing and just as many could still find it difficult to believe the out come of that fight Eubank Jr. falls in that category too.

“It was such a shock. You look at the weigh-ins, the face-offs and you look at the size difference, you look at the guys physique – I thought Ruiz was gonna be in there for a round or two max and then he’s gonna get blasted out of there.

“But it’s one of those things. Boxing is a crazy sport and so many fighters deal with these losses and it’s how you deal with them that makes you a true champion.

“The only way I can explained what happened is that he may have taken his foot off the gas in terms of preparation physically and mentally. He probably didn’t respect Ruiz, he probably underestimated him.

Eubank Jr. believes that Anthony Joshua will come back stronger after the loss, defeat Andy Ruiz Jr. in Saudi Arabia, then go on to super fights with Deontay Wilder and Tyson Fury.

“I think he’ll win the rematch and then he’ll go onto fight the big names in Fury and Wilder,” he said.
“The whole world still wants to see those three fight each other, especially Wilder against Joshua and Fury against Joshua.
“And I believe they are fights he can win.”