Errol Spence Warns Shawn Porter We Have A Game Plan 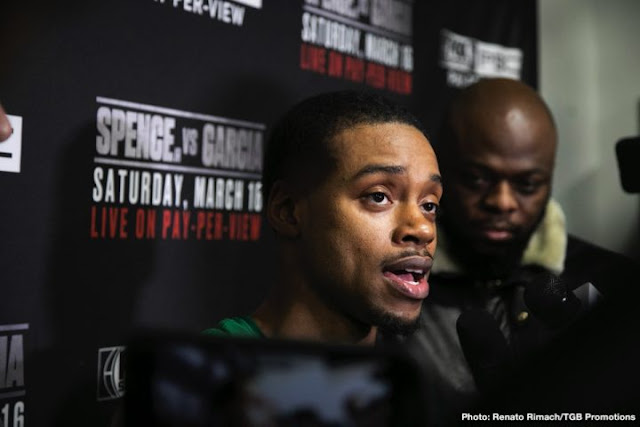 “I acknowledge that [Porter] is kind of dirty. A lot of times he does like to fight dirty, especially if things don’t go his way,” said Spence Jr., the IBF welterweight titleholder. “I’m not worried about it. We’ll have a game plan for it.”

Spence promised not to worry about tactics, as Porter tends to switch over to his Jungle tactics, when things are not working to his favor and that might distract him from his game plan

“Maybe he can bring out different tools in my arsenal,” said Spence Jr. “He’s a guy who’s rough and rugged. If I do start outpointing him, he’s going to try and make it rough and knock me out of my gameplan, trying to miss me and break me down like he does with his other opponents. I’ll be ready for anything.”

Porter has been known for his aggressive fighting style and this has seen him work down opponent but some fighters claim, he deliberately head-butts during fights but this doesn’t bother Spence, as he believes his size advantage will be equalizer.

“I believe I can do the same thing too,” said Spence Jr. “He’s going to try to break me down mentally. It’s on me not to fold. It’s about switching gears throughout the fight, turning it off and on and showing my whole talent.”