Skip to content
HomeSports NewsErrol Spence Aims To Stop Shawn Porter, Then Clear Out The Division

Errol Spence Aims To Stop Shawn Porter, Then Clear Out The Division 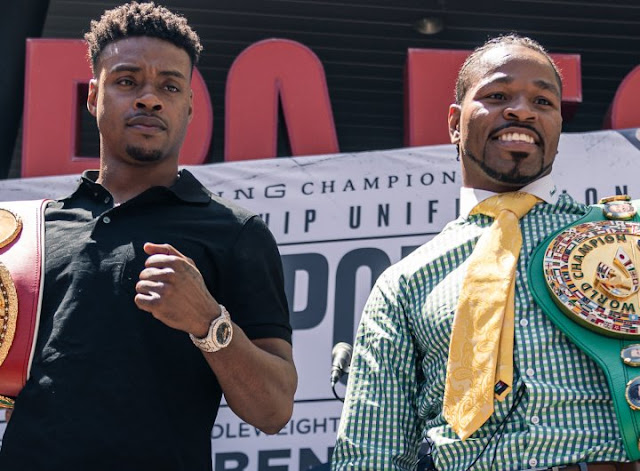 IBF Welterweight Champion Errol Spence is aiming for a knockout win over his WBC counterpart  when they both meet in the ring in a unification battle on on Saturday, September 28 from Staples Center in Los Angeles, California.

Shawn Porter has previously lost twice in his career but both were Decision loses to Keith Thurman and kell Brook. However, Spence is planning to win by stoppage.

He intends to send message to every contender in the Welterweight division with a spectacular stoppage and intends a total clear out of the division.

“I know Shawn will keep this same energy on fight night. It’s going to be an amazing moment when I get this knockout at Staples Center. This is what I’ve been waiting for. I had to be on the sidelines and watch Shawn fight Keith Thurman and Danny Garcia, but now I’m in that group. I have the opportunity to fight these top guys and make my name known,” Spence said.

“My whole thing is that I’m looking for the stoppage. I want to make a statement that I’m clearing out the division. I want Manny Pacquiao and all of the top names in this division.”

Spence will be making his first unification fight, after waiting and advocating for a along time now and says he is fit, promising to bring every thing to the table just as his opponent Porter has always done in the past.

“Shawn is a warrior who always comes to fight and leaves his heart on the table. He always comes ready, but I’m in shape and ready for him too. We’re both always in exciting fights and that’s what we’re going to give the fans,” Spence said.

“You’ve seen my growth over the years to where I’m fighting in bigger and bigger stadiums and headlining the pay-per-views. Now I’m in a unification fight, which is what I’ve wanted for a long time.”