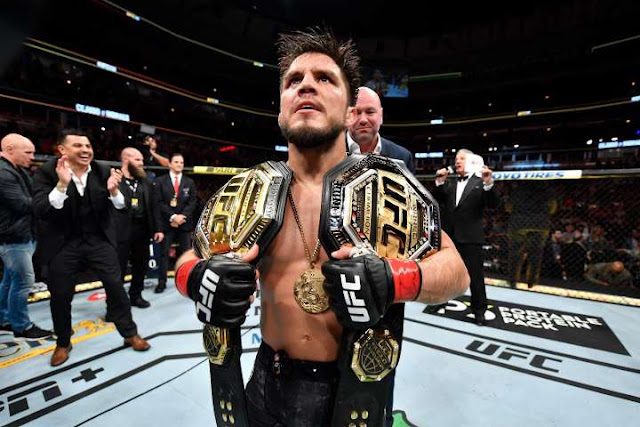 UFC President  Dana White has threatened to strip Henry Cejudo of his Bantamweight title if he has no plans of defending the title.
Cejudo defeated Marlon Moraes tow win the title back in June and has since been on recovery after going through a shoulder surgery.
Cejudo has been very vocal concerning his need for an opponent and has been calling out almost everyone in the division including former bantamweight champion Dominick Cruz and former featherweight champion Jose Aldo.
However the UFC, according to Dana White on Tuesday is willing to pair him with flyweight contender Joseph Benavidez, who has been long due for a title shot.

“Right now, we have some things playing out at 135 pounds. What we’d like to see Cejudo do is defend his title against [Joseph] Benavidez,” UFC president Dana White said on Tuesday night following the latest installment of the Contender Series. “Benavidez is ready.“It’s the right thing to do. If he can’t, then he needs to give up one of the belts.”

Cejudo won Gold in the 2012 Olympics and after winning the Flyweight Title and the Bantamweight labeled himself “Triple C”, a status which seems to be under possible attack if it isnti defended.

“He needs to defend that [flyweight] title,” White said. “First of all, we’re playing some things out to see who’s going to be the next challenger at 35.“Benavidez is ready to go. He deserves it and he’s got a win over Cejudo.”

Benavidez is on a four fight winning streak with nine wins in ten fights under the UFC banner  He has been calling for a shot since Cejudo upset records to twin the title against Demetrius Johnson.