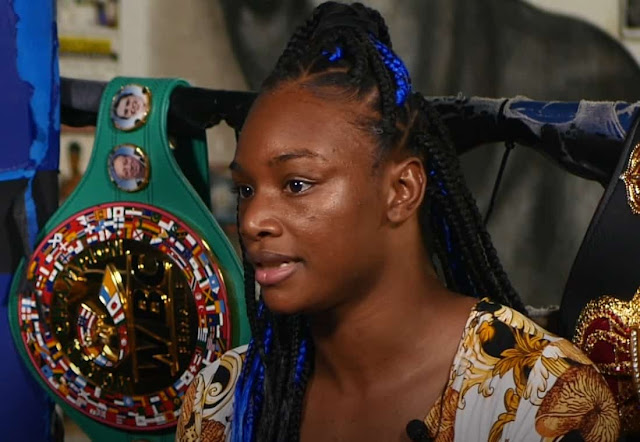 Unified Middleweight Women’s champion Claressa Shields is now fully recovered from her knee injury and will now be facing Ivana Habazin on October 5th in Michigan, where she will be battling to become a three division champ in front of her hometown.

The fight will be for the vacant WBO Junior Middleweight title and will take place at the Dort Federal Credit Union Event Center and will be the Main event of a SHOWTIME televised card.

The fight was initially scheduled to take place on August 17th but due to a knee injury Shields (9-0, 2 KOs) suffered during a road work, the fight was postponed indefinitely on June 20th

Shields defeated Christina Hammer (24-1, 11 KOs, 1 NC) via Unanimous Decision to become the Undisputed champion in the women’s middleweight division, adding the WBO title to her IBF, WBA and WBC Titles.
Shields is set to break Vasily Lomachenko’s record of becoming a three division champion in 12 professional fight, if she succeeds in defeating Ivana Habazin in her tenth professional bout.

“I’m more excited than ever,” said Shields, who’ll move down from 160 to 154 pounds for this fight. “I’m 100-percent recovered, and I can’t wait to get back in the ring and fight in front of my hometown fans in Flint as undisputed champion of the world. Having the opportunity to become world champion in a third weight division faster than any man or woman in boxing history will make October 5 a night I will cherish forever. It’s another big step in history, and a giant step in lifting women’s boxing on the road to equality.”

Ivana Habazin (20-3, 7 KOs)  is a former IBF Welterweight Champion, now rated No. 1 by the WBO at Junior middleweight. She is coming off a 10 round unanimous decision victory Eva Bajic (14-17, 9 KOs) back in December  a revenge of her first career loss.
She lost her Welterweight title to undisputed welterweight champion Cecilia Braehkus (35-0, 9 KOs) in a unification fight back in 2014 and will be heading into her first title fight since then.

“It’s an honor and a dream to fight in the U.S. on national television,” Habazin said. “A lot of fighters never get this opportunity in their careers, so I know I need to make the most of it. I’ve been training for this fight since June and the postponement has only given me more time to get ready. I intend to put my best foot forward to impress the fans and show that I am for real.
“I am not just coming to fight for a world title – I am fighting for my life and my career. I believe I am the best and now I’ve got the chance to prove that, and there is no better opponent for that than Claressa Shields.”