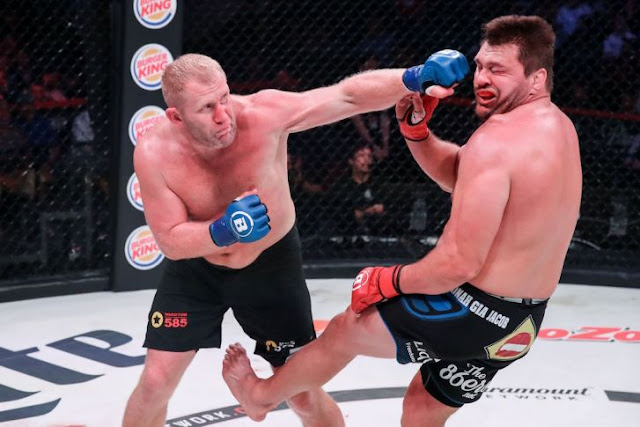 Sergei Kharitonov knocked out Matt Mitrione in the main event of their Rematch at Bellator 225. Their first meeting ended in controversy with Mitrione landing a low blow on Kharitonov, making him unable to continue, however this time Mitrione got knocked out and the blame was his mouth piece.

Mitrione had a lot of success in the first round, detecting play and walking down Kharitonov but thing went sour, as Mitrione’s mouthpiece stated falling out towards the midway point of the first round and after it fell for the third time, the referee sent him a warning of a point deduction if it happened again and he argued it wasn’t his fault.

During the break that, the referee still went over to Mitrione’s corner to make his point clear and Mitrione explained he had another mouthpiece in the bag but that fell fine deaf ears, as they only tried making him focus.
The second round didn’t last too long, as a right hook from Kharitonov knocked out the mouth piece again, which left Mitrione frustrated and driven by that rushed in before the referee could intervene and got hit with an uppercut that dropped him, followed by some finishing blows and the fight was over.
Kharitonov is unbeaten in eight fights now and is next in line to face heavyweight champ Ryan Bader  who fights Cheick Kongo two weeks from now in Bellator 226.