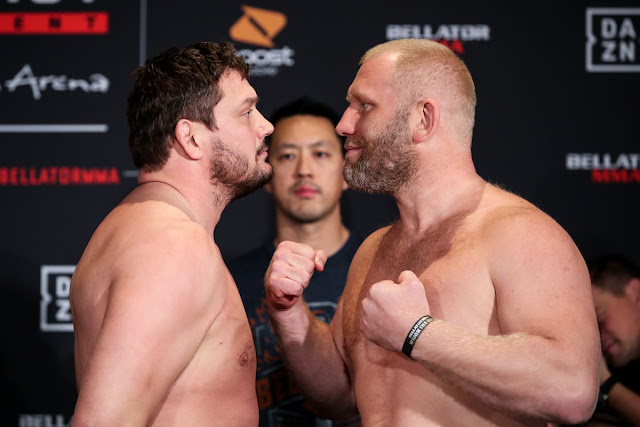 Matt Mitrione and Sergei Kharitonov will share the octagon ones again at Bellator 225 at the Webster Bank Arena, Bridgeport, Connecticut.

Mitrione (13-6, 1 NC) and Sergei Kharitonov (28-6, 2 NC) fight ended in a no contest after Mitrione landed a serious kick on Kharitonov, just 15 minutes into the bout and it was later reported, Kharitonov suffered a hemorrhoid as a result of that kick.

Mitrione will be hoping for his first win in about a year, his last win the Bellator HW tournament quarterfinal matchup with Roy Nelson but was dominated and lost to the eventually winner Ryan Bader in the Semi final.

Kickboxing and MMA Veteran Sergei Kharitonov is unbeaten since his devastating knockout loss to Javy Ayala in his Bellator debut and presently runs on a seven fight unbeaten streak, which also includes two of his last fights, which ended in a no contest. He knocked out Roy Nelson in his last fight.

Below is the full Card.. Check Back On the 24th for live Results