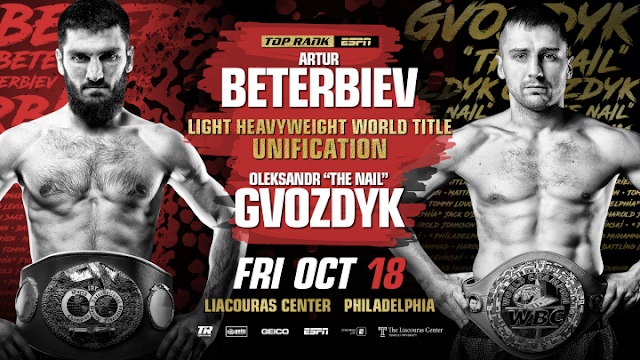 The fight card, which is promoted by ESPN will see the two unbeaten fighters with a combined record of 31 – 0 with 28 knockouts colide in a very good exampleeof the best fighting the best.

Beterbiev has knocked out every single opponent he has faced and presently is the only current world champion with a 100 percent KO ratio. Beterbiev knocked out Enrico Koelling in the twelfth round to win the IBF title and has gone on to defend the title twice, recently knocking out contender Radivoje Kalajdzic in the 5th round back in may 4th.

“I wish to thank Top Rank and my opponent, Oleksandr Gvozdyk, for making this unification bout possible and giving the fans around the world what they want,” Beterbiev said. “This will be a great fight between the two champions who aspire to become the undisputed light heavyweight world champion. I am looking forward to stepping into the ring on October 18.”

Gvozdyk knocked out the Adonis Stevenson in the 11th round of their fight back in December in Quebec City, Canada to win the title and has since defended it ones, a fifth round knockout of Doudou Ngumbu in Philadelphia. This will be his second defense.

“My first goal was to win a light heavyweight world title. Now, I want to unify the belts, and that mission starts with Artur Beterbiev,” Gvozdyk said. “This is going to be a spectacular fight, one that the fans will enjoy. The fans asked for this fight, and we will deliver. One thing I know is that I will be the unified champion. I have the best trainer, Teddy Atlas, in my corner. This is our third fight together, and under his guidance, I will continue to get better.”

The fight will headline Top Rank on ESPN card and will be broadcasted on ESPN and ESPN Deportes, Starting from 10 p.m. ET/7 p.m. PT