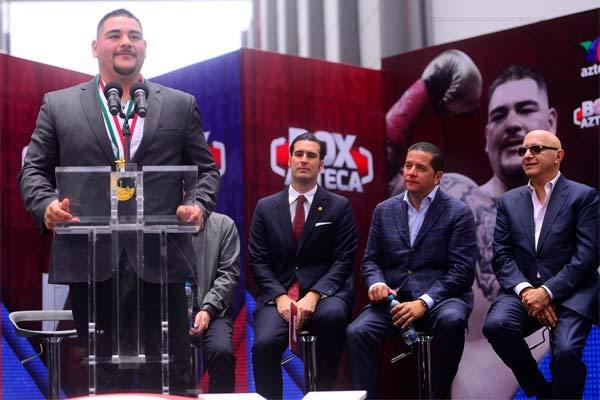 Anthony Joshua and his promoter Eddie Hearn have been all in the news recently with claims that the Ruiz – Joshua rematch venue has been  finalized for Saudi Arabia. This statements have now been denied by the IBF, IBO, WBA and WBO champion in his recent comment.

Eddie Hearn announced during a press conference on Tuesday that the deal for the fight has been Finalized, however Ruiz Jr. claims the fight is still in the negotiation phase.

Andy Ruiz Jr shocked the world and defied all odds on June  1st by coming off the canvas and dropping Anthony Joshua four times en route to a seventh round stoppage victory.

It is claimed by the Anthony Joshua team that the Pre first fight contract gave the Joshua team the power to chose a Location for a Rematch. However Ruiz Rejects that claim and doesn’t want to fight in Saudi Arabia.

“I have not signed anything yet (to fight in Saudi Arabia), we are negotiating everything. They want to do the fight over there (in Saudi Arabia), but we have to see where (it takes place) and we will negotiate that with my team. I would like it in New York again, where I won. I’ll give him a chance to try to beat me, and if he wants the belts, he has to do it there,” Ruiz told ESPN Deportes.

Eddie Hearn has been threatened to trigger a legal battle between the sides, if the Rematch isnt honored.

Asked about the tactics, Anthony Joshua will used in the rematch, Ruiz replied.

“I think he will want to run a little more, move around, but he is too big, he has a lot of muscle and it will be very difficult for him to do that,” said Ruiz