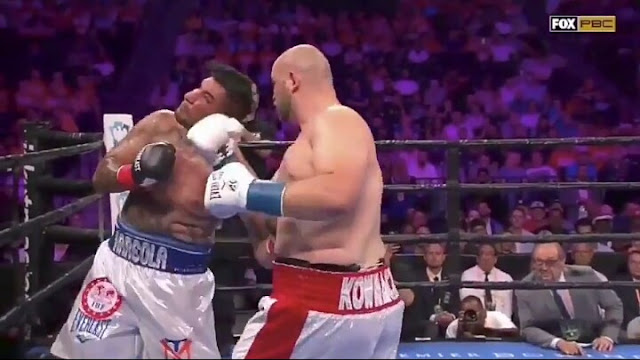 Adam Kownacki (20-0, 15 KOs) retained his undefeated status with a unanimous decision victory over Chris Arreola with scores 118 – 110 and 117 – 111 ×2 on Saturday night, the headlining bout of PBC on Fox event at the Barclays Center.

The fight didn’t play out as many believed it will be with top prospect facing a huge underdog. Adam Kownacki landed as many heavy and hard punches as possible on the Veteran Arreola but couldn’t knock him out but instead recieved the toughest fight of his career.

Arreola (38-6-1, 33 KOs, 2 NC) did than many expected, instead of a fight gave Kownacki a brawl, showed toughness and took him through twelve rounds for the first time in his professional career.

Arreola entered the ring for the third time since losing by an eight round knockout to WBC champion Deontay Wilder in 2016 and had a two year lay off before returning with a knockout win over Jean Pierre Augustin (17-1-1, 12 KOs), of Providence, Rhode Island in December.

The fight was contested on close quarters, a back and forth battle that drew respected from both fighters, both hugging it out before the start of the last round.

Kownacki had a huge turn up by polish fans at the Barclays Center and their creams was heard through out the 12 rounds and that served more as a motivation through it.

Kownacki was the most accurate of the two and with the most output but got tired in the championship rounds and that was complimented by Arreola, who seem to have injured his arms from the eight round and couldn’t land ad much as he did early in the fight.