David Price Defeats Dave Allen Via TKO In Round 10 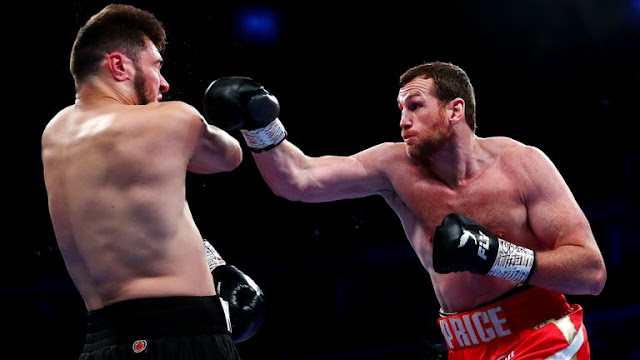 David Price came out victorious against Dave “White Rhino” Allen in the Whyte-Rivas Undercard, forcing him to retire on his stool after the 10th round.

Price effectively broke down the younger Allen and was totally in control of the fight before the fight was stopped by Allen’s corner before the starts of the eleventh round.

Right from the opening bell, price made use of his height and reach advantage effectively against the smaller Allen, who fought defensively for most of the first three minutes till he got caught with a few uppercuts.

Allen improved in round two, had a few successes with his right hand and even stunned the Liverpool fighter but he recovered and regained his control over the fight.

At round three, both fighters had their periods of success, Price landing cleanly a series of One two combinations that bloodied the Doncaster fighter while he had a few successes with his right hand.

The next two rounds were even  as both fighters engaged in a fiery exchange, each scoring with right hands but the action got halted, as price Gum shield was blown out of his mouth.