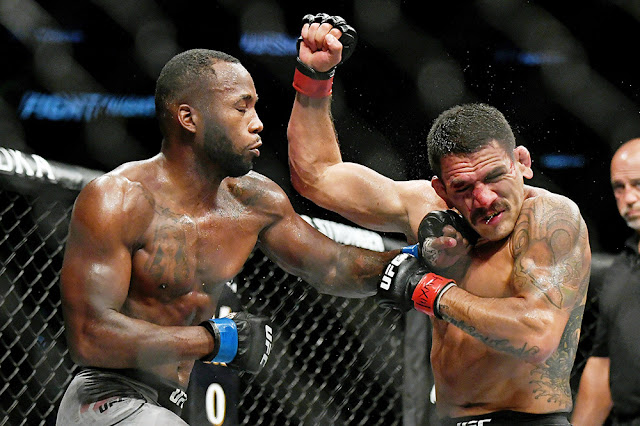 Leon Edwards Clinched his eight straight victory with a dominant display, out-struck, outwrestled, and outworked RafaRa Dos Anjos in the UFC On ESPN 4 main event on Saturday night at the AT&T Center in San Antonio, Texas.

Edwards was clear on his intent right from the opening bell, taking the former UFC Lightweight Champion down early and tried to end the fight with a ground and pound but Dos Anjos escaped, surviving till the bell was heard.

Anjos got some progress in the second round, landing some good strikes with a deafening speed but Edwards was more calm and connected more elbows, especially immediately after referee intervention. Anjos kicked Edwards off balance towards the end of the second round and landed some elbows before Edwards regained his composure.

Edwards was the better fighter in Round three  controlling the distance and clinched whenever dos Anjos was making significant progress and capitalized immediately after separation. He did the same in round four and also attempted a flying knee and scored a spectacular take down.

By round five, it was clear dos Anjos wasn’t going to win on the scorecards, so he tried hard to get the only other way to win and failed, as Edwards made use of his smart defense to control the fight.