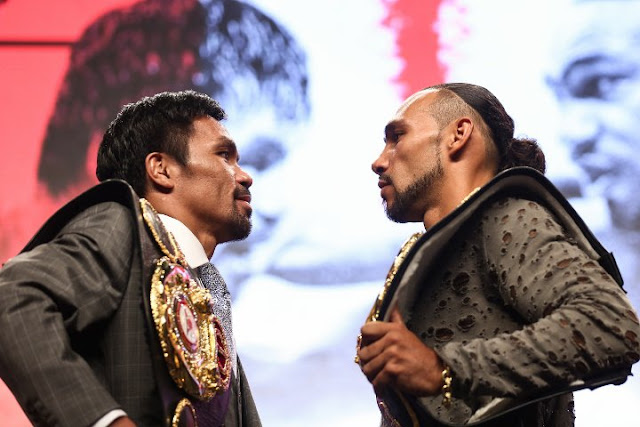 Boxing’s only eight division champion Manny Pacquiao has given his prediction ahead of his Pay Per View fight with WBA “Super” Welterweight Champion Keith Thurman at the MGM Grand on Saturday.

Keith Thurman believes he is capable of stopping Pacquiao and more so stopping in the first round and believes this will actually be the end of the Philipino Legend’s career.

However, Pacquiao also concurs to the prediction that the fight is more likely going to end within the distance and according to him will be 100% possible, if the Champion chooses to trade with him.

“There is a big percentage that this fight will not go 12 rounds. That is not a prediction, just my analysis. If he goes toe-to-toe with me that will be lovely. It will make it a shorter fight.” said Pacquiao.

“Keith Thurman is a good fighter. His record shows that. His record also shows who he has fought. His era of opposition is a lot different than mine. The difference between the mentality of my era compared to Keith Thurman’s is I have a strong passion for the sport of boxing and he seems to have other interests. I still have something to prove at age forty.

The  Legend believes that this fight is his legacy fight and wants to show the world that he still has a lot to offer at the age of 40. This according to him makes him push himself to the limit and hopes his opponent will be able to match his pace and output on Saturday night.

“This is not about my legacy. It is about adding an important milestone to my résumé. It is about proving that at forty I can still fight anyone, that I am still relevant in boxing. I have pushed myself to the limit in training camp and I am prepared to push myself to the limit on July 20. Keith Thurman has talked a good game. We will see how far he is willing to push himself on Saturday night.”