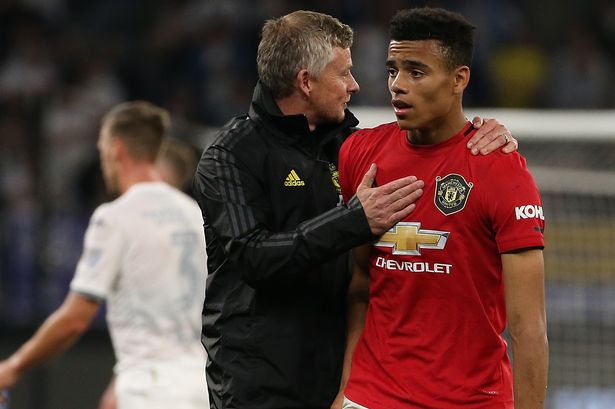 Manchester United striker Mason Greenwood has been making quite aawave for his performances for the Red Devils during the Pre season friendlies.

This wave has not only be observed by the Fans, it is also felt by the players. Left back Luke Shaw has joined the group of those tipping him for greatness at the theater of dreams.

Greenwood, who just made it up from the Manchester United academy scored his first goal for the senior team in the 4 – 0 win over Perth Glory in Australia and also the winning goal in the 1 – 0 international Champions Cup win over Inter.

Ole Gunnar Solskjaer has already hinted, he might be among those featuring in their Premier League opener against chelsea.

“It’s quite easy to tell when someone’s got something about them as a player; all four of them have got different qualities that one day or even very soon will make a United player and I think Mason’s very close,” Shaw said.
“I’ve got no doubts he could be an important player for us at the end of the season.
“It’s hard to think he’s still 17, he’s got so much talent it’s unbelievable. He’s two-footed – that’s unbelievable for that age.
“He’s got the maturity level that is so much above his age but he’s not cocky. It’s the perfect way to be.”

Luke Shaw overcame some heavy criticism and a serious career ending injury to Cement himself in the Red Devils and knowing how hard it is to make it in a club like United, is willing to offer his knowledge in the development of the Players